Amid Backlash, DMK MP A Raja Apologises To Tamil Nadu CM For His Comments On Latter’s Mother

DMK leader A Raja had claimed that Tamil Nadu Chief Minister Edappadi K. Palaniswami was born out of an ‘illicit relationship’ 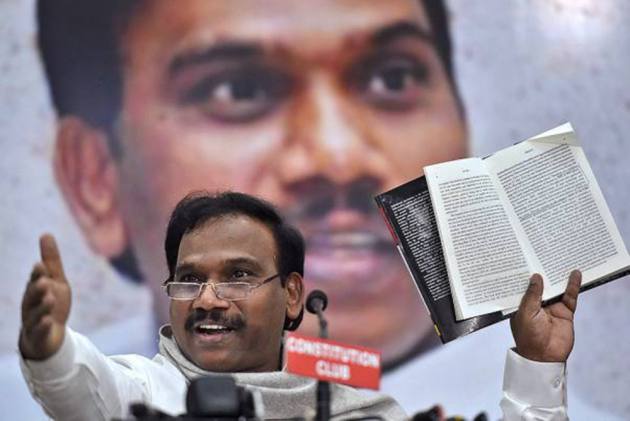 DMK leader A Raja, who has found himself in the eye of the storm, apologised to Tamil Nadu Chief Minister Edapaddi K Palaniswami for his comments on the latter’s mother.

While addressing an election rally, last week, Raja had compared DMK chief M.K Stalin with the chief minister and said,”While Stalin was born out of a legitimate relationship and through a normal delivery, Palaniswami was born out of an illicit relationship and through a premature delivery. And a doctor from Delhi – Prime Minister Modi – is giving a healthy certificate to this premature baby by holding his hand.”

Raja’s comments created a furore in the state, with the ruling AIADMK urging the Election Commission to bar Raja from campaigning for the upcoming Assembly polls.

While Raja extended an apology to the CM on Monday, he claimed his words were “misunderstood” and “manipulated”.

Raja's apology to the AIADMK veteran comes a day after the chief minister turned emotional at an election rally in Chennai while recalling the episode, besides police booking the Nilgiris MP under relevant sections of the Indian Penal Code and Representation of People Act over the matter.

Elections to the 234 member Tamil Nadu Assembly will be held on April 6.

Raja said he clarified in a public meeting in Gudalur in the district on Sunday that he did not intend to defame Palaniswami or his late mother but that he was making a comparison between the leadership qualities of his party chief M K Stalin and the CM, using a children's analogy.

"Still, I came across reports that the chief minister turned emotional at my remarks and I am deeply anguished over this. I express regret from the bottom of my heart for lines that were misunderstood," he said.

"In fact, I have no hesitation to apologise to CM Palaniswami if he really felt hurt and (did not do it) for politics (turning emotional)," he read out from a statement before reporters here.

Seeking to clarify things with the CM, his party workers and others, Raja said his speech was not about the personal criticism of two leaders, but an estimation and comparison of two political figures in public life--Stalin and Palaniswami.

He said he had extended the apology since the CM had turned emotional and that he did not want the episode to remain a "black mark" in his public life.

He also did not want to embarrass his party DMK or its chief Stalin, Raja added.

To a question, he said possible electoral gains may be behind the matter becoming controversial.

Raja's alleged vulgar remarks had earlier touched a raw nerve with the ruling AIADMK, with party workers staging state-wide protests demanding his arrest, even as his effigies were burnt in places like Salem, Palaniswami's native district.

The CM on Sunday turned emotional while reacting to Raja's alleged disparaging remarks against him, his mother and said a mother occupied a lofty position in society and anyone who denigrated women would be punished by God.

The ruling party had also petitioned the Election Commission, seeking a ban on Raja from campaigning.

AIADMK ally BJP had also hit out at Raja for his comments, with Union Minister Smriti Irani alleging that "DMK is such a political party that does not respect women."