NRC officials claimed the process to hand out rejection slips would have indeed started had the Coronavirus not hit the country. 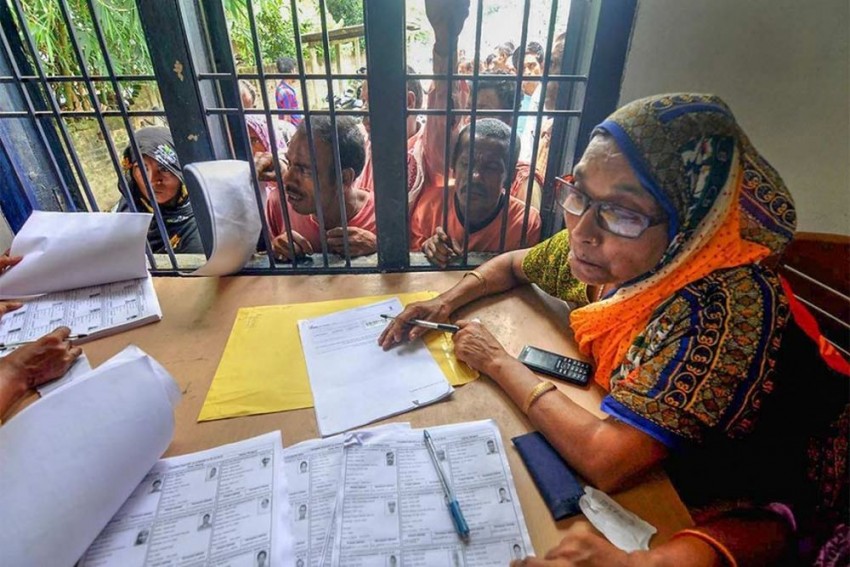 People wait in a queue to check their names on the final draft of the state's National Register of Citizens after it was released, at an NRC Seva Kendra, in Morigaon.
PTI FIle Photo
Sadiq Naqvi March 20, 2020 00:00 IST Amid Coronavirus Outbreak, Assam Puts Distribution Of NRC Rejection Slips On Hold

Over 1.9 million people, who did not make it to the final National Register of Citizens (NRC) list in Assam, will not get the rejection slips for now because of the Coronavirus outbreak, a senior official said.

“If we start giving the rejection slips now, the people will gather at NRC NSKs (Nagrik Seva Kendras). It is not advisable because of Coronavirus,” said Hitesh Dev Sarma, the state coordinator of the NRC, on Thursday.

Since the final NRC list was published on August 31, the fate of the over 1.9 million people out of the list has been in limbo as they continue to wait for these rejection slips which would form the basis of their appeals to the Foreigners Tribunals (FT). These slips would include the reason for the exclusion of the concerned individual from the NRC list.

Assam has 100 existing FTs where suspected illegal immigrants have to prove their Indian citizenship. Another 200 new FTs have been set up for the NRC appeals but they are likely to start disposing of already pending cases first since the rejection slips are still awaited.

The NRC secretariat had not announced any date for giving out the rejection slips unlike in the past where timelines were announced in advance after informing the Supreme Court which has been monitoring the exercise. But, Chandra Mohan Patowary, a senior cabinet minister in the state government had told the Assembly recently that the rejection slip distribution will start from March 20.

Sarma claimed the process to hand out rejection slips would have indeed started had the Coronavirus not hit the country. “The work is almost done. We would have announced the date also had Coronavirus outbreak not happened” he said. “We may have to wait for another fortnight now,” Sarma said.

Another senior official with direct knowledge of the developments, however, said while the work is nearly complete, some compilation of data is still to be done. This official said, apart from the pandemic, the forthcoming elections in Bodoland Territorial Council is also one of the reasons why the work has been held up.