Officials said over two dozen pregnant women were evacuated and shifted to hospitals in various areas of the Kashmir valley over the past four days. 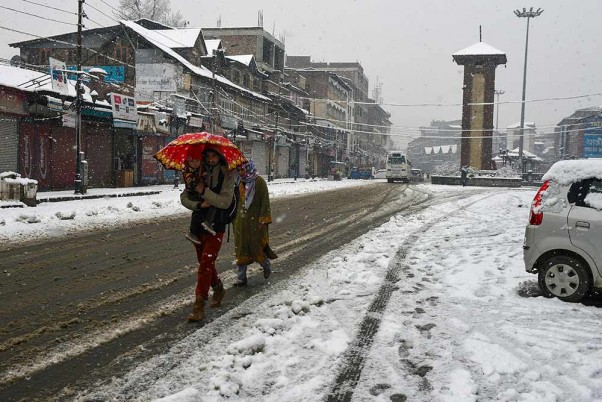 Pregnant women and patients who needed to reach hospitals in snowbound Kashmir found a saviour in the government which pulled out all stops to help them.

On Tuesday, as many as 21 pregnant women -- some with complications -- were evacuated from the snow-bound areas of Anantnag district by synergizing the efforts of various departments like health, revenue, police, mechanical engineering department (MED), roads and buildings and PMGSY, the officials said.

Continuous snowfall for the past 72 hours in Kashmir region for the past four days has crippled life across the state with people facing problems due to blocked roads at many places.

As the heavy snowfall – as much as eight feet in south Kashmir areas – posed a challenge to those who needed to travel for emergency purposes, there were instances when patients and pregnant women had to be carried on makeshift stretchers to hospitals.

According to officials, a woman in south Kashmir's Shopian district gave birth while she was being taken to a hospital amidst heavy snowfall, which had blocked the roads in the area, on a makeshift stretcher on Tuesday.

Various other cases have also come to the fore where officials from the police and civil administration came to the rescue of patients and expecting mothers.

Officials said over two dozen pregnant women were evacuated and shifted to hospitals in various areas of the Kashmir valley over the past four days.

Most of these women are from south Kashmir areas that have experienced heavy snowfall, they said.

They said all the women were safely shifted to sub-district hospital and other nearby public health centres and so far six of them have delivered babies at the hospitals, while the rest are under observation or undergoing treatment and stated to be out of danger.

In another such effort, two pregnant women were transported to a sub-district hospital at DH Pora in Kulgam district, the officials said.

They said ambulances from the hospital were called to ferry the expecting mothers late at night, but the roads were blocked.

The drivers of the ambulances were accompanied by a snow cutter/JCB which cleared the roads, but due to heavy snowfall the task was completed in about five hours, they added.

Another pregnant woman, who was in a serious condition, was shifted to a hospital from the Sunbrari Kokernag area of Anantnag in an ambulance amidst heavy snowfall, the officials said.

They said over three feet of snow had accumulated on the road and the ambulance was accompanied by a snow clearance machine/JCB.

A pregnant woman evacuated from Hayatpora area of Shongpora in central Kashmir's Budgam district was ferried to a hospital in a snow clearance machine which had to pave the way for itself, the officials said.

Not only pregnant women but several patients were rescued by the administration by sending snow clearance machines to their places of residence.

Patients from remote and snow-bound areas of Kulgam were ferried to the district hospital in a snow clearance machine late last night.

Shifting of the body of a young boy was facilitated by the mechanical engineering department to his home at Wathora, which experienced heavy snowfall, from Chadoora hospital in Budgam, the officials said.

Personnel from police and other departments also lent a helping hand to people stuck with their vehicles at several places across the valley, the officials said.

Bhat said this would ensure all lanes and by-lanes in far-flung areas would get cleared of snow and the move would also provide employment guarantee to the people at a time when there is no work for them.

“RTI Movement has been demanding to undertake snow clearance work under MGNREGA for last many years, but the government isn't taking this seriously. Employment guarantee is the essence of MGNREGA, but this doesn't get fulfilled in the winter months in Kashmir,” Bhat said in a statement.