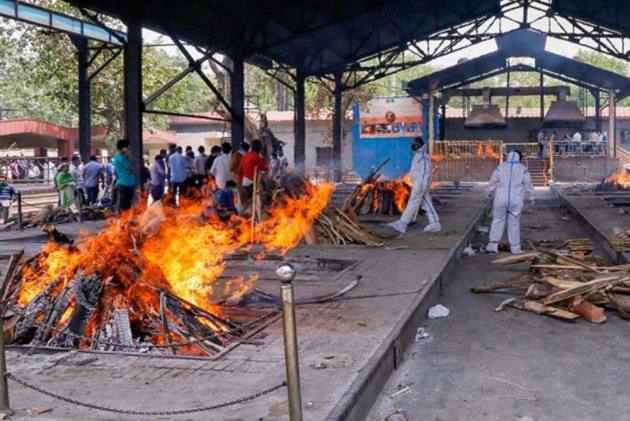 Amid hospitals in Delhi facing a shortage of medical oxygen, the national capital on Friday logged a record 348 Covid-19 fatalities as the city reported 24,331 fresh infections.

This development comes in the backdrop of 25 Covid-19 patients succumbing to the disease in Delhi’s Sir Ganga Ram Hospital due to “low pressure oxygen”.

Covid-19 fatalities have been rising in Delhi ever since the second wave of the pandemic gripped the country with as many as 2,100 people dying due to the disease in the city during the last 11 days.

Delhi’s Covid-19 positivity rate stands at 32.43 per cent, according to the latest health bulletin.

With the fresh cases, the national capital's cumulative tally climbed to 9,80,679 on Friday. The death toll stands at 13,541, the bulletin stated.

The number of tests is significantly less than the average of around 90,000 tests a day being conducted in the capital. So far, over 8.75 lakh patients have recovered in Delhi, it added.

The number of active cases in the city increased to 92,029 from 91,618 on Thursday, the bulletin stated.

Senior medical experts on Monday said the second wave of coronavirus in Delhi is likely to peak within a week after possibly hitting a positivity rate of 50 per cent before the numbers start to go down.

Jharkhand's Covid-19 death toll rose to 1,715 as the state reported a record number of 106 fresh fatalities in the last 24 hours, the health department said in a bulletin on Friday.

Jharkhand now has 40,942 active cases, while 1,42,294 people have so far recovered from the disease, the bulletin said.

Of the fresh fatalities, 53 were reported from Ranchi and 14 from East Singhbhum, it said. The remaining deaths were registered in several other districts.