Even as six new cases of COVID-19 were identified in neighbouring Pathanamthitta district, devotees participated in the annual Attukal Pongala festival. 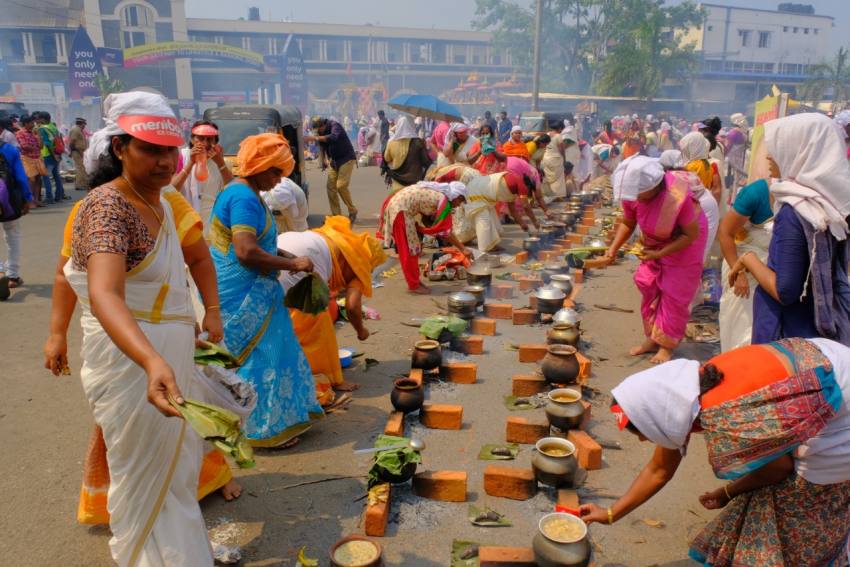 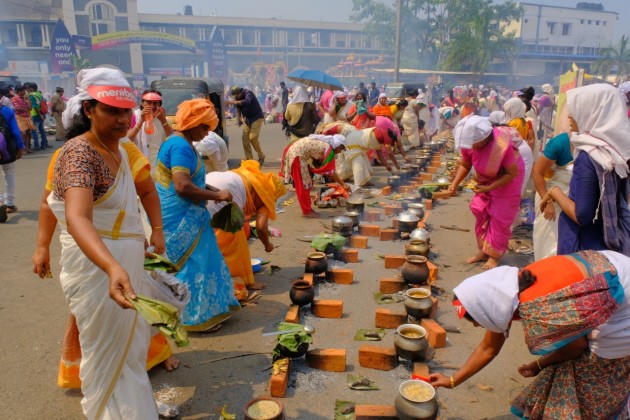 Neither the sweltering heat nor renewed fears over Coronavirus deterred lakhs of women from participating in the annual Attukal Pongala festival in the city on Monday. Even as six new cases of COVID-19 were identified in neighbouring Pathanamthitta district, devotees – many wearing disposable face masks – from across the state and beyond lined the streets from dawn to noon.

As the smoke from the burning hearths cleared and the pilgrims consumed the pongala offering – a gruelling mix of rice, jaggery and scraped coconut prepared over an open flame -- some wondered if it was not a recipe for disaster.

“Initially, we were concerned about the reports of the new cases. But most have been regularly participating in the festival for several years. The authorities had said that precautions had been taken. Seeing the crowds, we had second thoughts but decided to not break the tradition and left it in the hands of the Goddess,” said Vidya Sreedhar, who was part of a group that made the five-hour rail journey down from Kochi on Sunday and slept rough overnight.

Across the festival zone, public transport hubs, health teams, police officers and officials were ubiquitous. Health guidelines in Malayalam, Tamil and English blared over the PA systems. Tourists were questioned to ascertain whether they had been to areas hit by COVID-19. After a visit to the Attukal Bhagavathy temple, tourism minister Kadakampally Surendran said that a group of holidaymakers from the Kovalam area had been turned back from visiting congested areas. He added that hotels had been instructed to inform foreign tourists to not venture into the temple zone.

People showing flu-like symptoms were also approached, though there had been no reports of anyone else being barred in any of the 30-odd wards where the ritual cooking is held. Residents who had not marked out their spots for the cooking hearths in advance were asked to conduct the ritual at their homes. In some areas, volunteer groups and resident associations handed out masks and pamphlets on basic prevention and hygiene while noting down details of attendees.

“Since the devotees are spending the whole day in close quarters, it was important to pass on the government-issued guidelines on how best they can protect themselves,” said Geetika Anuj, who helped organise an awareness camp near the airport. She noted that there had been a run on hand sanitisers in the city shops and dispensaries over the weekend.

In the temple itself, regular sanitisation of public spaces and high-contact points like railings as also proper queue management was made mandatory. Health Minister K.K. Shailaja conducted an inspection of the temple complex in the morning. Speaking to the media on Sunday, she said, “Since months of preparations would be upended if the festival was canceled, the government had decided to go ahead with it. Strict instructions have been issued that those showing any symptoms of the virus should avoid crowded places. Video of participants would also be taken to make it easier to get in touch with them should any issues arise.”

District collector K. Gopalakrishnan noted that 23 health services teams would be on high alert throughout the day. In addition, 40 ambulances were ordered to remain on standby. As well, he said, a range of public safety concerns, including street lighting, food and water safety besides e-toilets had been addressed. In addition to the increased police bandobast, CCTV cameras were installed at a number of high-traffic areas.

However, not everyone is convinced. “When there is a Union health ministry circular to avoid mass gatherings to prevent the spread of COVID-19, why is Kerala the exception? In spite of all the precautions, there is going to be a public health crisis at the end of this,” a senior medical professional said.

Noting that the guidelines in place offered the best chance of prevention, state Nodal Officer of Public Health Emergency of International Concerns Dr Amar Fettle said, “The Attukal Pongala is here and will be over soon. But the festival season in the state is ongoing. If anyone knows of any point where someone can be successfully barred from attending, I would ask them to share that info with us. Such measures won’t work. There is no way for us to screen or question the lakhs of people who are going to come into the state in the coming months. The onus is on them to stay away and report to the local health authorities if they suspect anything.”