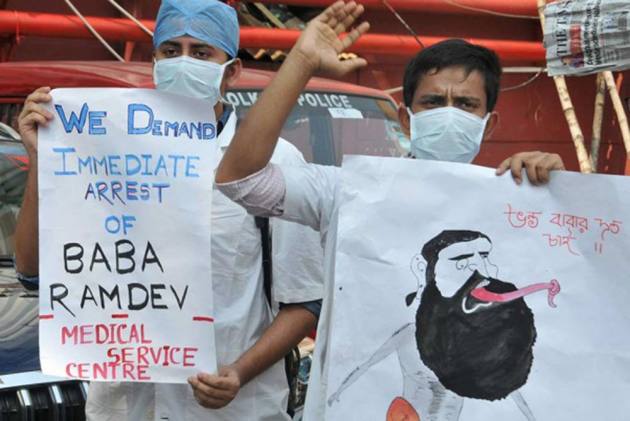 Amid a spike in the number of attacks on doctors across India, members of the Indian Medical Association (IMA) on Monday wrote to prime Minister Narendra Modi seeking action to ensure safety of medical professionals.

Further, the top doctors’ body also highlighted the need to tackle misinformation against modern medicine and added that those who are spreading false reports about the Covid-19 vaccination must be booked under relevant provisions of the Epidemic Diseases Act, 1897, the Indian Penal Code and the Disaster Management Act, 2005.

This development comes just days after yoga guru Ramdev claimed that allopathy is a “stupid science” and medicines such as remdesivir, faviflu, and other drugs approved by the Drugs Controller General of India have failed to treat Covid-19 patients.

‘I Accept It Has Served Humanity’: Amid Backlash Ramdev Withdraws Comments Belittling Allopathy

"All such acts of omission and commission on behalf of any person raising doubts in the minds of the common public against the protocol guidance issued by the Ministry of Health for treatment of Covid-19 infected patients – ought to be suitable punished and simultaneously, any attempt of any person to fool the gullible public and promote so-called 'magic remedies' or 'wonder drugs' without the approval of the Ministry of Health, Government of India – ought to be immediately curtailed," the IMA stated in its letter to Modi.

In its appeal, the doctors' body said the government should promote universal free vaccination to all above 18 years of age without leaving the vaccines to the extent of 50 per cent to the states and private hospitals.

"In the midst of this pandemic, we are also deeply hurt to see the increasing incidents of physical violence against the doctors and the health care professionals in this country. The brutal assault on our young doctor in Assam and the assault on lady doctors and even on veteran practitioners across the country - are really causing mental trauma amongst the practitioners," the letter stated.

"The Health Services Personnel and Clinical Establishments (Prohibition of Violence and Damage to Property) Bill, 2019, which seeks to punish people who assault on-duty doctors and other healthcare professionals by imposing a jail term of up to 10 years – which, apparently, was dismissed by the Home Ministry during an inter-ministerial consultation over the draft law, ought to be promulgated immediately along with the incorporation of provisions from the IPC/CrPC and with stipulations for a fixed time schedule for speedy conclusion of trials," it said.

The doctors said all those involved in such heinous crimes ought to be punished to also create an effective deterrent for other antisocial elements who may indulge in attacking any health care professionals.

The IMA said doctors who have lost their lives in the war against the Covid-19 pandemic ought to be recognised as Covid martyrs with due acknowledgment of their sacrifice and that their families ought to be duly supported by the government.

The doctors' body highlighted that due to various obstacles in the procedural implementation of the Pradhan Mantri Garib Kalyan Yojana scheme under which insurance benefits are being extended to such families, out of 754 doctors who had lost their lives in the first wave, families of only 168 doctors have been able to apply under this scheme.

It urged the prime minister to create an effective mechanism for identifying and verifying all these victims through the Central Bureau of Health Intelligence (CBHI) and also ensure that support is given to all the said families as solatium at their door steps.

The post COVID complications of lung fibrosis, increased thrombotic events and fungal infections are on the rise and everyone needs to be prepared for the same, the IMA said.

Noting that drugs needed for the mucormycosis fungal disease were not available with ease, the doctors thanked Modi for the efforts taken to import the drugs and simultaneously augment indigenous production.

"We appeal to you to set up a separate research cell to study these post COVID-19 complications in detail and to come out with multi-faceted treatment guidelines in all disciplines of medicine," the IMA said.

"The IMA has decided to continue to seek your intervention on the above issues and also to organise various intellectual meets, dialogues, and finally the National Protest Day on June 18 to secure smooth, cooperative and optimum milieu for Modern health care professionals which will enable them to work with much more compassion and dedication and without any fear of mental or physical harm," the letter added.