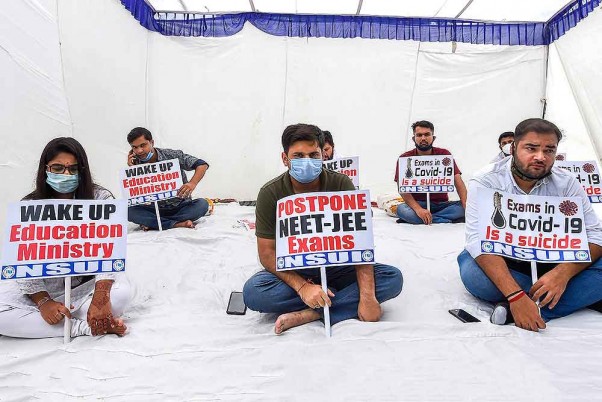 Notwithstanding the government’s assurance that the JEE-Main and NEET will be conducted in a “safe environment”, protest against the government's decision to conduct the two entrance tests next month continued on Wednesday with the Left-backed All India Students Association (AISA) vowing not to give up until the exams are either cancelled or postponed.

Amid the row, however, students continued downloading their admit cards for taking the entrance tests.

“Students are ready to take exams. More than 5 lakh NEET aspirants downloaded their admit cards today within a few hours after it was opened at 12 noon,” an National Testing Agency (NTA) official said.

NSUI president Neeraj Kundan sat on a hunger strike along with other members of the students outfit.

Meanwhile, Students Federation of India (SFI), students wing of the Communist Party of India-Marxist (CPI-M), unleashed a “Twitter Storm”, giving a call to students to join the move on the microblogging site against the government’s decision to conduct JEE and NEET.

To keep up the heat, the AISA gave a call to students to join the protest from their home on Thursday.

“Raise black flags from homes, tie black bands on arm or forehead, wear black mask, turn profile pictures (on social media accounts) black. Use placards, posters, printouts for your points with hashtag of the day --#Rise_AgainstExamsInCovid,” the students outfit said in its call for Thursday’s protest.

“NEET-JEE aspirants are worried about their health and future. They have genuine concerns of—fear of Covid19 infection, transport and lodging during pandemic, flood-mayhem in Assam and Bihar. (The) Government of India must listen to all stakeholders and find an acceptable solution,” Congress leader Rahul Gandhi tweeted, supporting the protest.

The National Testing Agency is set to conduct the JEE-Main from September 1 to September 6 for National Institutes of Technology (NITs) and other engineering colleges. The testing agency will conduct the NEET for undergraduate medical programmes on September 13.

Also Read | ‘Let's Not Be Deterred By Covid’: IIT-Delhi Director On JEE-NEET

The government decided to conduct the JEE-Main and NEET as scheduled after the Supreme Court recently dismissed a plea seeking postponement of the two entrance exams, observing that there was “absolutely no justification in the prayer.”