The police did not allow several women from Andhra Pradesh to go to the Sabarimala temple to pray. 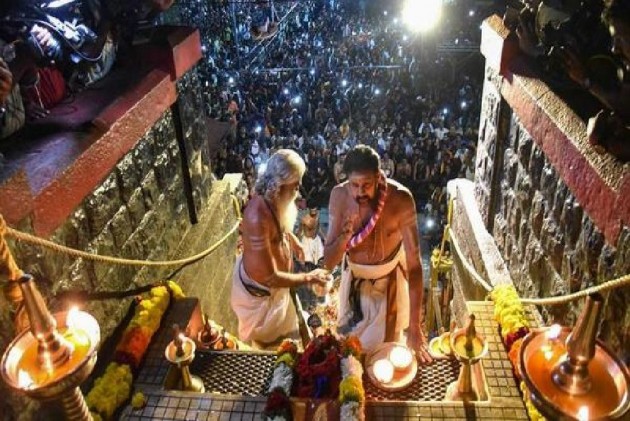 Amid tight security, the gates of the Lord Ayyappa temple at Sabarimala were thrown open for the two-month-long Mandala-Makaravilakku pilgrimage season.

Kandararu Mahesh Mohanararu opened the sanctum sanctorum of the temple at 5 pm, and performed the poojas, as hundreds of devotees from Kerala, Tamil Nadu, and other neighbouring states thronged the shrine located in a reserve forest of the Western Ghats in Pathanamthitta district of the state.

Also Read: The Tribal Ayyappan: The Idea Of A Puranic Deity Is Being Challenged

Devotees, who were allowed to trek the hill from 2 PM, climbed the sacred 18 steps to the temple with the "irumudikettu" (sacred bag containing the offerings to the Lord) after the priests performed the "padi pooja".

The state and temple precincts had witnessed frenzied protests by right outfits and BJP workers last year after the LDF government decided to implement the Supreme court's verdict of September 28, 2018, allowing women of all age groups to offer prayers at the shrine.

However, this year, even though the top court had not stayed its verdict on entry of young women into the shrine while posting various petitions on the matter to a larger bench, the government was exercising caution.

Devaswom Minister Kadakampally Surendran has made it clear that Sabarimala was not a place for activists to display their activism and said the government would not encourage such women who want to visit the shrine for publicity.

Also Read: Can Sentiment Be Placed Above Constitutional Morals?

Those who want to visit the temple can procure a court order to enter the temple, he had said.

The board has made elaborate arrangements to provide maximum amenities to the devotees.