CM Ashok Gehlot says the people of Rajasthan have shown their love and trust in the government like never before, and there is no anti-incumbency in the state. 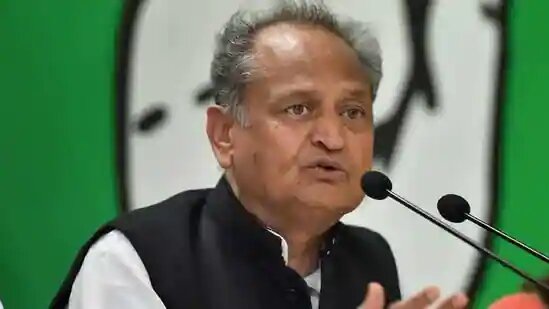 Breaking his long silence over the rumours of political tremors in Rajasthan Congress after the change of guard in Punjab, the chief minister Ashok Gehlot said that the Congress government will complete its tenure and will also return in the next election by breaking the anti-incumbency in the desert state.

Gehlot who was addressing at the inauguration of an outreach program on the occasion of Gandhi Jayanti on  Saturday  said, "People of Rajasthan have shown their love and trust in the government like never before. We are already halfway through and there are no signs of anti-incumbency in the state. We will complete the tenure and return once again".

Without naming any leader, Gehlot said that he is healthy and fit to live for another 15-20 years and serve the people for Rajasthan. "I recently underwent Covid and then a surgery at the SMS hospital. My arteries were blocked but now I am healthy and fit. Nothing is going to happen to me for the next 15-20 years and those who want to get upset over it can get upset", said Gehlot at the chief minister's residence while addressing the media and the dignitaries. The chief ministers thanked the people of Rajasthan for sending their wishes and prayers when he was down with Covid and undergoing surgery recently. He also urged people to go for a heart check-up after they have contracted the Covid-1`9 virus.

Unlike Punjab, Why Congress High Command May Not Replace CM In Rajasthan

Ruling out any tremors in the Congress in Rajasthan, the chief minister said that such stories are a plant by the media and have no actual bearing to it. "I don't know who tells them these stories. Suddenly after a political change in Punjab, the Delhi media started making stories about Rajasthan. All they want is to please the owners of media houses who are accountable to PM Modi. All I want to tell them is that nothing is happening in Rajasthan. The Congress is enjoying full support and love of the people here as it is working for development and has no personal agenda", added Gehlot.

Taking a jibe at the opposition BJP the CM Gehlot said that the allegations made by them are misleading. "The BJP keeps saying that I don't go out of my house. I want to remind them as well as the former home minister Gulab Chand Kataria that we are still living in the middle of a pandemic and should follow all SOPs. In Rajasthan, the party lost its leader Kiran Maheshwari but they still haven't learnt from the loss. THe Covid is a ruthless disease and doesn't save anyone whether its a common man, a politician or an activist".

At his address, he also spoke about the relevance of Mahatama Gandhi's teachings  today. Referring to the opposition BJP, Gehlot said, "If you accept Gandhian values accept these from within. If you succeed to do so, all issues such as communalism and love jihad will be taken care of. Gandhi has taught us brotherhood and Satyagraha".

Gehlot's speech puts a full stop to the anticipations of change of guard in Rajasthan which was anticipated by the media after the leadership change in Punjab. The Congress leaders Rahul Gandhi and Priyanka Gandhi Vadra's two meetings with Rajasthan leader Sachin Pilot within a week had indicated high command's focus to track down the feud between the two factions in the desert state. But the situation in Punjab was different than in Rajasthan, where the present chief minister Ashok Gehlot still enjoys the support of the majority of MLAs.

Earlier this week Rajasthan revenue minister and senior Congress leader and Harish Choudhary, who was a central observer during the recent leadership change in Punjab, said that the situation in Rajasthan and Punjab are different and state Chief Minister Ashok Gehlot has the support of a majority of MLAs.

In Rajasthan chief minister Ashok Gehlot is facing a continuous pressure of expansion of the cabinet by the Sachin Pilot camp. Pilot, who was removed as deputy chief minister and state Congress chief after the rebellion in July 2020, is also demanding inclusion of his people in various boards, corporations and other political positions.

As per the sources, in the two meetings with Gandhi's, the Pilot had discussed the pending cabinet expansion in Chief Minister Ashok Gehlot government and induction of MLAs from his camp. The meetings have once again made the loyalist MLAs of Sachin Pilot group hopeful of high command fulfilling the promises made to them when they were wooed back to the party following his rebellion last year. "We have been waiting for over a year. We are hopeful that high command will keep our demands on priority and will intervene", an MLA from Pilot's camp told Outlook.

However, as per the sources close to Gehlot, the CM is looking from all sides before the expansion. "It is not only Pilot's group he has to keep in good books, there are also independent MLAs, the former six BSP MLAs and those MLAs who stood with Gehlot. He has woo everyone which is why it's taking him some time for the expansion". As per the sources, The expansion may take place at a suitable time between Navratra to Diwali.