Home minister Amit Shah is on a three-day visit to Jammu and Kashmir as part of the Union government's mega outreach programme under which 70 ministers are visiting the UT. 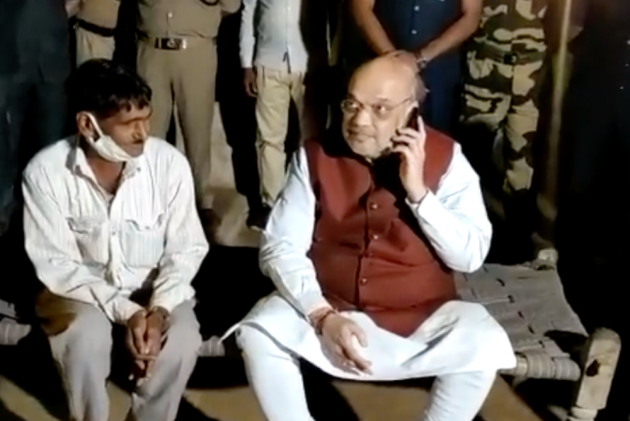 A Jammu man now has the personal phone number of Union Home Minister Amit Shah in his phonebook and has been told by the minister himself that he can call him anytime he needs.

Amit Shah, who is on a three-day visit to Jammu and Kashmir,  visited the Makwal border in Jammu on Sunday, and interacted with the locals. And one such interaction has gone viral on social media. During his visit to border area, Amit Shah spoke to a resident and exchanged numbers with him.  According to reports, he reportedly told the man that he can contact him whenever he needs.

The interaction was caught on tape and shared on on social media. In the video, a local Jammu man can be seen sitting on a bench with Amit Shah and J&K Lieutenant Governor Manoj Sinha was also present.

The home minister is in J&K this month as part of the government's mega outreach programme under which 70 union ministers are visiting the Union Territory. This is Shah’s first visit to J&K after the Centre revoked the erstwhile state's special status and bifurcated it into two union territories on August 5, 2019.

During his trip, Shah was scheduled to visit several remote areas of the Kashmir Valley and the Jammu region, and take stock of the development initiatives.

On Sunday, Shah also addressed a rally in Jammu's Bhagwati Nagar area where he stated that the sidelining of the people of Jammu will no longer continue and that Kashmir and Jammu will be developed together.

Addressing the rally in the Bhagwati Nagar area, Shah said no one will now be able to create hurdle in the development of Jammu and Kashmir.

If the youth join the development of Jammu and Kashmir, terrorists will fail in their sinister design, he asserted.

Earlier in the day, Shah also inaugurated a new Indian Institute of Technology (IIT) campus in Jammu. On day three, the minister is expected to address panchayat and BJP leaders in J&K.

Earlier on Friday, Shah had laid out a "roadmap" for the militancy-hit region by announcing that J&K's statehood will be restored after the delimitation of constituencies followed by assembly elections.