Suvendu Adhikari, nine other MLAs and one TMC MP join the BJP in Amit Shah’s presence 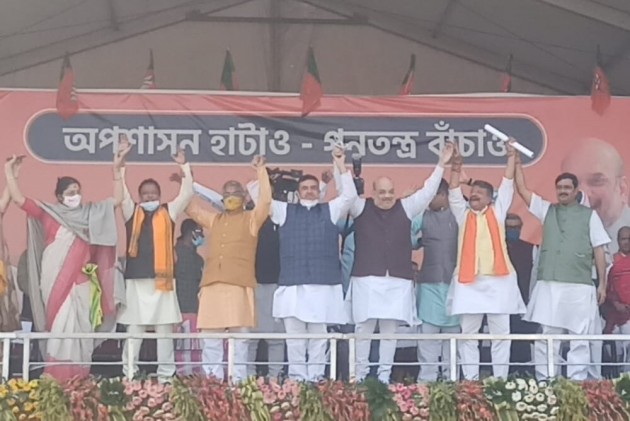 Former Trinamool Congress (TMC) heavyweight Suvendu Adhikari joined the BJP in the presence of Union home minister Amit Shah at a public rally in West Midnapore district on Saturday, along with six other TMC MLAs, two Left MLAs and one Congress MLA and one TMC Lok Sabha MP.

This was the single biggest event of defection of elected public representatives in Bengal’s recent political history.

In Pics: Amit Shah Arrives In Bengal On 2-Day Visit

Shah said that the joining of Adhikari was “the highlight” of Saturday’s event.

Adhikari, who tendered his resignation at the Assembly earlier this week, held three ministerial portfolios in Mamata Banerjee's cabinet until resigning in November and, until July, he was the TMC's in-charge for five of the state's 23 districts. He was a part of the seven-member steering committee, the TMC’s highest decision-making body.

“You’ll be left alone by the time the election happens,” said Shah, referring to Mamata Banerjee, while saying that leaders were beelining to switch over from the TMC to the BJP.

“People who are coming to us had started working with the slogan of Maa-Mati-Manush (mother-land-people) but they saw the slogan transform into Tolabaji-Tushtikaran-Bhatijakaran (extortion-appeasement-‘nephew-isation’),” said Shah.

“You care only for your nephew. When do I make him the chief minister, that’s all you care about while the people of the state keep suffering,” said Shah.

Adhikari, too, gave the slogan of “Bhaipo-hathao”, or remove the nephew, in an obvious reference to Mamata Banerjee’s nephew, Abhishek Banerjee, who has emerged as the de facto ‘number-2’ in the party over the past one year and a half.

While politicians switching over camps has been a new phenomenon in Bengal -- since the TMC's ascent to power in 2011 -- nearly three dozen MLAs from the Congress and the Left had switched over to the TMC over the past nine years.

For the TMC, Adhikari had played a crucial role in getting to defect Left and Congress MLAs to the TMC.

Several of those TMC MLAs who joined the BJP in Shah's presence are known as Adhikari's loyalists and are quitting the party at Adhikari's call.

The 49-year-old former minister had also served as Lok Sabha MP two times and the TMC's youth wing president. He had been one of the most popular TMC leaders in the state after Mamata Banerjee.

Incidentally, the two TMC leaders who played the biggest roles behind getting Congress and Left leaders to defect to TMC are Mukul Roy and Suvendu Adhikari, of who the former joined BJP in 2017 and has since been instrumental in getting disgruntled TMC leaders to join the BJP.

Now, with Roy and Adhikari in the opponent camp, the TMC is likely to face a tough challenge in keeping its house in order, feel political observers.

During Saturday's event, Roy liberally expressed his jubilance at getting Adhikari to his side in fighting Mamata Banerjee.

"December 19 will mark the day of the beginning of the TMC's collapse like a house of cards," said BJP state unit president Dilip Ghosh.

Sougata Roy, TMC Lok Sabha MP, said, “These desertions will have no impact. We will have their replacements. It’s Mamata Banerjee who matters."