Karnataka Chief Minister B S Yediyurappa has not challenged the authenticity of the video clip. 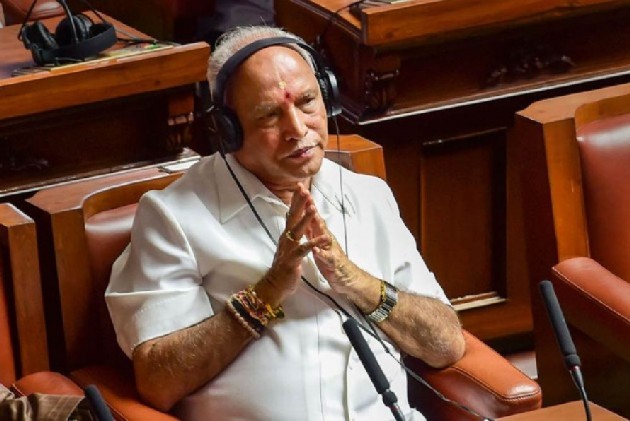 A video clip, purportedly of Karnataka Chief Minister B S Yediyurappa, backing a group of rebel MLAs whose resignations allowed the BJP to come to power in July is now doing the rounds, much to the party's discomfiture.

The Opposition is pointing to the video clip as an admission that BJP engineered defections to topple the Congress-Janata Dal (Secular) government earlier this year.

Outlook could not verify the authenticity of the video clip.

In the video, supposedly recorded last month at Hubbali during a meeting with BJP party workers, Yediyurappa appears to be telling off partymen over their stance on the approaching by-elections. Bypolls are due in Karnataka on December 5 and there have been rumblings among the BJP's local leaders over giving tickets to the Congress and JD(S) rebels.

"Going by your tenor, it doesn't appear to me that there are any concerns about keeping this government in power. All of you here are aware that the decision by these 17 MLAs wasn't taken on Yediyurappa's word alone, the national president was aware," goes the purported video recording (the conversation is in Kannada) that appeared in public on Friday.

"They didn't visit their constituencies, didn't see their families for 2.5-3 months, you all know that. Winning or losing elections is a different issue, we can put in our best effort. But in this serious situation, when we are now the ruling party instead of sitting in the opposition because of an opportunity created by these MLAs who resigned, you are not saying that we will stand by them, come what may."

The Congress and Janata Dal (Secular) MLAs whose resignation brought down the H D Kumaraswamy-led coalition government have approached the Supreme Court against their disqualification by the Speaker. The apex court, which completed hearings last week, has reserved its judgment.

He also clearly reveals that @AmitShah took care of the defectors for 2.5 months in Mumbai.

The Congress and JD(S) have all along accused the BJP of having lured its legislators to topple its coalition government which lasted 14 months. In February this year, H D Kumaraswamy, as Chief Minister, had released audio recordings -- again, purportedly of Yediyurappa trying to convince a JD(S) MLA's son to defect. That expose had led to a long discussion in the Karnataka Assembly about alleged horsetrading.

"This is what we people said earlier," said K C Venugopal, Congress national general secretary in-charge of Karnataka, at a press conference. "Now, it is established beyond doubt because of the video evidence of Chief Minister Yediyurappa. He said that Amit Shah is behind the entire management of this poaching episode."

"We are expecting the honourable Supreme Court will see this matter very seriously and take action accordingly. Congress will approach the SC with this latest evidence," said Venugopal.