Animated welcome given to Amit Shah by AIADMK cadres is something usually reserved for former party supremo Jayalalithaa. 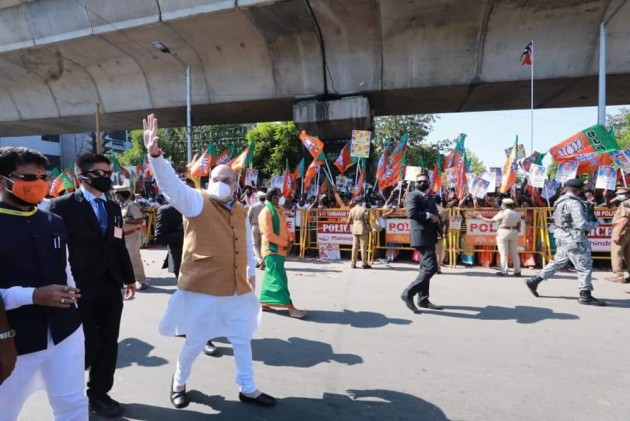 Union home minister Amit Shah will return to Delhi with the biggest political takeaway from Tamil Nadu – a political alliance sealed with the ruling All India Anna Dravida Munnetra Kazhagam (AIADMK) for the 2021 Assembly election.

Both Chief Minister K. Palaniswami and his deputy O. Panneerselvam used a government function in which Amit Shah kick-started a slew of projects to announce that the AIADMK’s alliance with the BJP, which had fought the 2019 Lok Sabha election, would continue for the coming Assembly election as well. After making the politically significant announcement the two leaders drove to Amit Shah’s hotel for a long confabulation.

On his part, the home minister, without directly reciprocating the AIADMK’s gesture, gave enough indication that the BJP would only be too happy about the development.  He used the function to shower the AIADMK government with encomiums for its sterling performance in various spheres - combating Covid-19, water management, support for the farm bills, implementing welfare measures tailored by the Modi government and industrial and infrastructure development.

He also had AIADMK leaders smiling as he launched a broadside against the Dravida Munnetra Kazhagam (DMK) for its corruption and dynastic politics. “The DMK keeps complaining that the Centre has done injustice to Tamil Nadu. I have listed out what the Modi government has done for Tamil Nadu. Can the DMK tell us what the UPA government did for Tamil Nadu during its ten years?” he asked. He also said that people of the country had been steadily rejecting dynastic politics election after election. “The people of Tamil Nadu will also reject family politics very soon,” he said as AIADMK leaders on the stage and in the audience cheered. The DMK, the architect of the 2G scam, had no right to speak of corruption he added.

Rather than disclose the alliance closer to elections the AIADMK’s decision to advance the announcement at this stage is also a pointer that Rajinikanth’s entry into politics and his possible tie-up with the BJP now looks extremely doubtful. The BJP also appears to have come around to the view that the superstar has dithered for too long to make a serious impression. So, for the BJP it is a win-win situation to have the AIADMK continuing its alliance with the BJP, in spite of the state government’s opposition to the “Vel” yatra by state BJP president L. Murugan.

The animated welcome given to Amit Shah by AIADMK cadres along the airport route and later to the venue of the function was something usually reserved for the party’s former supremo Jayalalithaa. And this is probably the first time that an entire state cabinet was in deferential attendance to welcome a Union home minister. All these were clear indicators that the alliance had been in the works at least between Amit Shah and the AIADMK’s top leadership.

Now, the other partners of the AIADMK led alliance like the PMK and DMDK would be compelled to be part of the front. Similarly, other smaller parties would also rush to be accommodated in a front that consists of the ruling parties at the Centre and the state. The home minister’s attack on the DMK could also indicate that the Centre could be cracking down on some of the top leaders of the party who are already being probed by the ED and CBI.