‘Congress Had Appointed Narayanasamy As CM Because Of His Servitude To Gandhis’: Amit Shah 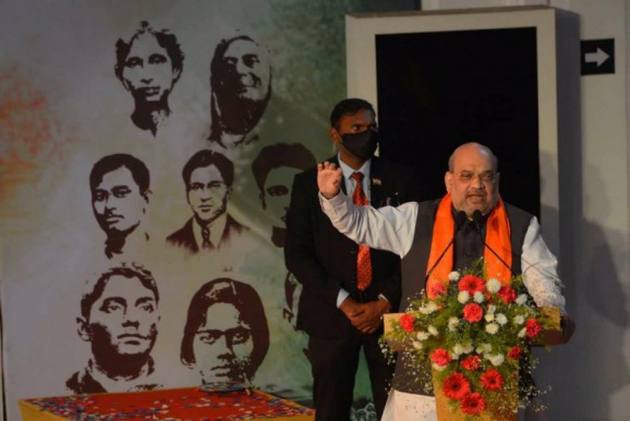 The senior BJP leader made the comments while addressing an election rally in Puducherry on Sunday. Puducherry will head to polls on April 6.

Shah claimed that the Congress government, which collapsed earlier this month after losing a trust vote in the Puducherry Assembly, indulged in "petty politics" over Central schemes meant for the Union territory.

With the aim of making Puducherry a “model UT”, Prime Minister Narendra Modi launched more than 115 schemes for its overall development, "but there was a government which wanted to do petty politics,” Shah alleged.

"They (Congress) were afraid that if the projects become popular in Puducherry, it may become detrimental (to Congress' prospects). They did not allow the projects and the (then) Narayanasamy government is responsible for this," Shah said.

Seeking a mandate for the BJP, he assured to transform the UT into "the jewel of India and take it across the world," if voted to power in the April 6 polls.

"So many senior leaders (form the Congress) are joining the BJP in Puducherry…Congress is collapsing due to dynasty and family not just in Puducherry, but across the country," he added.

Over the years, the Centre had granted around Rs 15,000 crore funds to Puducherry, Shah said and asked if the money had reached the people in the villages, to which the audience responded in the negative.

"So where did the Rs 15,000 crore given by Narendra Modi go? Narayanasamy made cut-money out of it and sent it in service of the Gandhi family in Delhi," Shah alleged. Even SC/ST funds were not spared, he charged.

Referring to Narayanasamy recently wrongly translating a woman's grievance against his government to Rahul Gandhi, Shah said the former CM "lied" even to his party's top leader.

"You made such a liar your Chief Minister. Narayanasamy can be given an award for lying," Shah said.

He also ridiculed Congress leader Rahul Gandhi for saying there was no “dedicated” fisheries ministry and pointed out that Modi had set one, two years ago. He took a swipe at the Wayanad MP, saying "you were on vacation (then)."

"Rahul Gandhi came here some time back and asked why the Centre had no ministry for fisheries. Rahul, you were on vacation. Modi had established two departments in 2019 itself. You don't know," he added.

"I want to ask the people of Puducherry-- a party's leader in the Lok Sabha for four terms doesn't know that there is a fisheries department. Can this party (Congress) do any good for Puducherry?" he asked.

Targeting Narayanasamy, he said he had not fulfilled his promises like setting up IT, Electronic parks and asked why the local body polls were not held, despite a court direction.

The Congress government did not hold the polls, last conducted in 2006, fearing that the "lotus will bloom in Puducherry," Shah said.

"But you can't stop the lotus from blooming in the Assembly polls," he said in reference to the BJP's symbol.

Highlighting the Modi government's commitment to usher in development in the UT, he referred to initiatives in various sectors like aviation and fisheries. Seeking a mandate for the BJP-led NDA, he assured to bring down unemployment from 75 percent to 40 percent in the UT, if voted to power.

Shah also expressed regret over not being able to speak in the "great Tamil" language and pointed out at Modi sharing similar views in his 'Mann Ki Baat' episode today.

Earlier, functionaries from other parties, including former Congress MLA A John Kumar, also once a confidante of Narayanasamy and ex-DMK legislator K Venkatesan, joined the BJP in Shah's presence.

Both Kumar and Venkatesan had resigned as MLAs earlier, two among a spate of resignations, including Namassivayam, even as the minority Congress government fell on February 22 before facing the trust voted mandated by Lt Governor Tamilisai Soundararajan.