It will be Amit Shah's first visit to the Bastar region after assuming the charge of Union home minister. 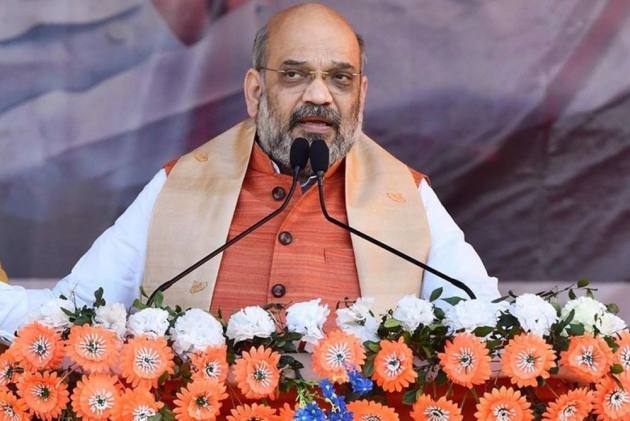 Union Home Minister Amit Shah will arrive in Chhattisgarh on Monday where he will visit the site where 22 security personnel were killed by Naxals in an ambush. Shah will also chair a high-level meeting to review the security situation arising out of the Saturday incident, a senior official said.

It will be Shah's first visit to the Bastar region after assuming the charge of Union home minister, he said.

During his visit, the union minister will meet some of the injured security personnel in a hospital.  Apart from 22 fatalities, thirty jawans were injured in the ambush.

Who Is Dreaded Maoist Hidma, The Mastermind Of Chhattisgarh Naxal Ambush On CRPF?

Chhattisgarh Naxal Encounter: CRPF Jawans Were 'Surprised And Ambushed' After 400 Maoists Surrounded Them From 3 Sides

Shah will reach the Jagdalpur airport (in Bastar district) at around 10.35 am, following which he along with Chhattisgarh Chief Minister Bhupesh Baghel will attend the wreath-laying ceremony to pay respect to the martyred personnel at the Police Lines in Jagdalpur, the official said.

In Jagdalpur, the wreath would be laid on the mortal remains of 14 security personnel, while tributes would be paid to the other deceased jawans at the Bijapur district headquarters, the official said.

Shah will later chair a high-level meeting at the Police Coordination Centre here on the Left Wing Extremism (LWE) situation. Chief Minister Bhupesh Baghel, senior officials of the state police and the Central Reserve Police Force (CRPF) will attend the meeting, he said.

Shah will then leave for the Basaguda camp of the CRPF in Bijapur in a chopper and will have interaction and lunch with the CRPF and state police personnel there, he said.

He will later go to Raipur and visit three hospitals where the injured personnel are admitted.

Shah will leave for Delhi at 5.30 pm on Monday.

The home minister on Sunday vowed to give a befitting response to the Naxals and said that the battle against the extremists will be won through joint efforts of the central and state governments.

Shah had said that the government will continue its fight against such enemies of peace and progress.

Twenty-two security personnel were killed and 31 others injured in the gunfight with Naxals between Jonaguda and Tekalguda villages along the border of Sukma and Bijapur districts on Saturday.

Out of the total 22 fatalities, the CRPF lost eight men, including seven commandos of the CoBRA (CRPF's elite unit) and one jawan of the Bastariya battalion, eight of the other deceased were from the District Reserve Guard (DRG) and six from the Special Task Force (STF).