‘The rules for implementing the Citizenship Amendment Act (CAA) are yet to be framed…We will consider it once vaccination starts,’ Amit Shah said 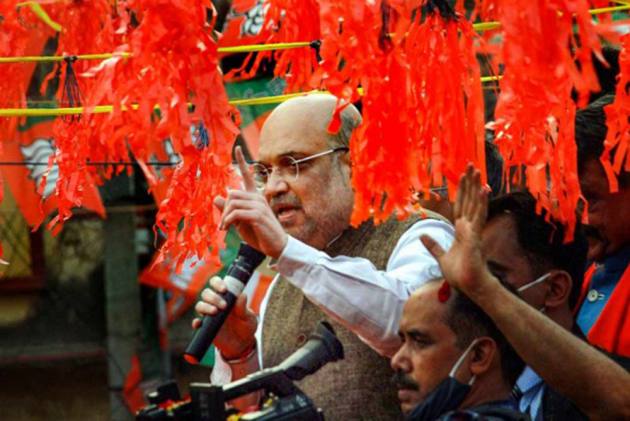 Union Home Minister Amit Shah on Sunday hinted that implementing the Citizenship Amendment Act (CAA) and the much-talked-about nation-wide National Register of Citizens (NRC) was no longer on the priority list of the Centre.

While responding to a question seeking updates on the CAA and NRC at a press conference in West Bengal’s Birbhum district, Shah said, "The rules for the CAA are yet to be framed. Due to coronavirus, such a massive exercise cannot be carried out. We will consider it once vaccination starts and when the infection chain breaks."

When reminded about his oft-quoted remark "Aap chronology samajh lijiiye" explaining the chronology in which the CAA and the NRC will be implemented, Shah said that the chronology had changed. "Let the first in the chronology (vaccination) complete," he said.

What About Jay Shah? TMC Guns For BJP In Nephew Tit-For-Tat

Amit Shah had made the earlier remark during a press conference in Kolkata in the run up to the 2019 Lok Sabha elections while explaining that the NRC would be implemented only after Hindus and other minorities from India's neighbouring countries were granted citizenship through the CAA.

Answering another question regarding CAA and NRC and why the issues were missing from his speeches during his current and previous visits to the states, Shah said, "This is not my last visit. We will speak on this at the right time and when we talk about it we will speak aloud."

Shah's Sunday remarks came following repeated assurances from the BJP's national vice-president Mukul Roy and national general secretary-cum-Bengal in-charge Kailash Vijayvargiya that the rules for the implementation of CAA will be framed by January.

The CAA was passed by Parliament in December last year and the government is supposed to frame the rules by the next six months, following which extensions of three-month periods can be sought. The government's second extension is scheduled to end in mid-January, 2021.

Roy and Vijayvargiya made those remarks after leaders from the refugee Matua and Namasudra communities started mounting pressure on the BJP leadership due to the delay in implementing the CAA.

Bongaon's BJP MP Shantanu Thakur, a leader of the politically influential Matua community, has been seen maintaining distance from his party. Lately, Thakur only participated in events mostly held under banners of apolitical organisations due to the Centre's failure in granting citizenship to the Hindu migrants from eastern Bengal.

On Sunday, no BJP leader agreed to speak on the issue.

"On November 5, during his Bengal visit, Shah had categorically said that NRC will be implemented and all Bangladeshi immigrants will be pushed back. Soon, Bangladesh refuted his statement, insisting that no Bangladeshi entered India illegally since 1971. The Bangladesh minister also said that Bangladeshis did not need to migrate to India because they had better economic growth," said Roy.

"I wonder if it's the stand of the Bangladesh government that is forcing the BJP to go quiet," Ray said.