Amit Shah’s Silence On ILP: Troubled Days Ahead For Meghalaya?

Pressure groups spearheading the demand for implementation of ILP had met Union Home Minister Amit Shah on Saturday, but were not allowed to proceed further than just making their submission. 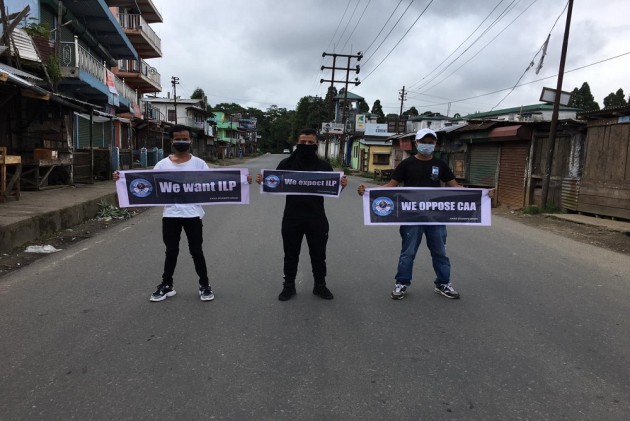 The writing appeared on the wall – literally – on Sunday indicating troubled days ahead for Meghalaya a day after union home minister Amit Shah gave short shrift to pressure groups demanding implementation of inner line permit (ILP) in the state.

Graffitis like "Grant us ILP otherwise we will revive the Instrument of Accession" and "Government of India when will you grant ILP to Meghalaya" adorned walls in sections of state capital Shillong while the effigy of Shah was burnt at Tura in Garo Hills. Members of Khasi Students Union (KSU) also took to the streets carrying placards at Sohra, where Shah visited in the morning, and in some areas of Shillong. The placards also carried similar messages saying "We want ILP", "We oppose CAA".

The effigy of Shah was burnt by activists of the Garo Students Union (GSU) and Achik Youth Welfare Organization (AYWO) in front of CM's office in the commissioner building, Dakopgre, Tura.

Pressure groups spearheading the demand for implementation of ILP had met Shah on Saturday, but were not allowed to proceed further than just making their submission. He asked if they had any other issue to discuss or the meeting could end leaving the groups fuming for his silence on the issue.

Effigy of union home minister Amit Shah being burnt at Tura in Meghalaya in protest against his silence on demand for implementation of ILP in the state on July 25. @Outlookindia pic.twitter.com/MXDqIIHJcR


AYWO president Sengbath Ch Marak said that they had burnt the effigy of Shah to express their disappointment. He said they would aggressively campaign for ILP. “This is just the beginning, everybody will see that we meant business,” he said.

Protesters burn tyres on a Shillong road on Sunday.@Outlookindia pic.twitter.com/7aFojnq7Kf


The groups that met Shah on Saturday included the Khasi Students Union, Federation of Khasi Jaintia and Garo People, Ri Bhoi Youth Federation, Hynniewtrep National Youth Front, Garo Students’ Union, Confederation of Meghalaya Social Organizations and others.
After the failed meeting the KSU said the groups would soon meet to discuss their next course of action amid the ongoing pandemic. “We have to find a cure to this virus that has been affecting our indigenous community for the past many years,” KSU president Lambokstarwell Marngar said.

Trouble had broken out over ILP and CAA in late 2019 and dragged on to early 2020 with large-scale incidents of arson and violence. However, the onset of the Covid-19 pandemic put the brakes on the agitation till it was revived again briefly once it subsided later in the year. The state is now grappling with the disease and any protracted agitation at this time could complicate matters on that front.