A student said the police entered a hostel and fired a tear gas shell into a room where three students were present. 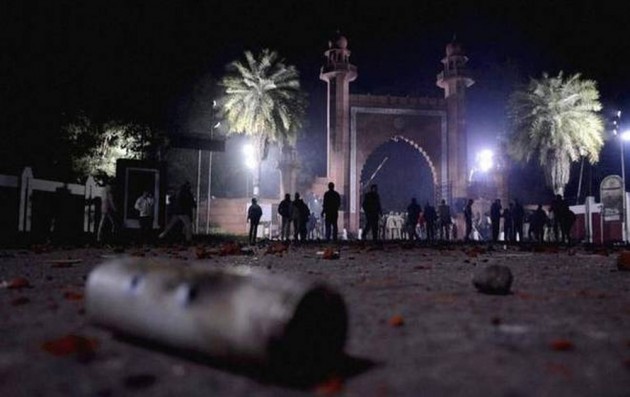 Doctors on Tuesday had to amputate the hand of a student of Aligarh Muslim University (AMU) who suffered injuries during the clashes that erupted in the campus on Sunday.

The students were protesting against the Citizenship (Amendment) Act and in solidarity with the students of Jamia Millia Islamia who were baton-charged by police in Delhi earlier that day.

The AMU student was injured when the police fired tear gas shells to disperse the protesters.

Three other students suffered serious injuries during the incident. “One of them lost a finger because of a shell explosion and another has a head injury. We referred one student to Gangaram Hospital as he was unstable here. He was probably injured by a blunt object,” said Haris Manzoor Khan, the medical superintendent at the hospital of AMU’s medical college.

Opinion: When Did Our Students Become Criminals?

The situation in the city is normal and under control, said Aligarh SSP Akash Kulhary.

On December 15, around 70 people, including students, AMU security guards and 20 policemen were injured in the campus violence, PTI news agency reported. Several students told Outlook "the police came with the intent to assault and not to disperse".

An engineering student, who was part of the protest, said that the students were leading a protest march in the campus to Bab-e-Syed, the university main gate, on Sunday evening.

“But the police started firing tear gas directly at students. They broke the main gate, barged in and started hitting students with batons. Later, they entered the Morrison hostel, even firing a tear gas shell into a room where three students were present,” said the student, requesting anonymity as he feared being targeted by the university authorities.

Another student from a neighbouring hostel said that the students in his building were so terrified that they switched off lights, locked the doors from inside and spent the night on the terrace.

Aligarh SSP Akash Kulhary denied the claims to Times Of India and said that no security personnel entered the hostel. However, CCTV footage shows the Rapid Action Force personnel entering the Morrison hostel at 6:22 pm and pushing parked motorcycles to the ground. The police also picked up 27 persons who were released a day later – of them, only seven were university students.

The locals and university teachers had protested for their release. Furthermore, the Internet has been shut down in Aligarh since the intervening night of Sunday and Monday.

Activist Harsh Mander, who was part of a fact-finding team that visited the AMU on Tuesday, said the situation was disturbing and the police violence at the campus was worse than Jamia.

“I have never seen such levels of police brutality at a student protest. We met one student who was stripped naked and beaten brutally in police custody. There were belt marks over his body and one hand was broken. The police also used communal language with them,” said Mander, a former bureaucrat, who now works on mass violence, custodial justice and food security among other areas.

The students were also told to vacate the hostels overnight, which Mander said, caused huge trouble to them. “How do 13,000 students move in such a short time? How do they book tickets? The whole situation was very grim.”

A resident student of Women’s College said the wardens told them to vacate the hostels immediately at 11 am on Monday. “I did not know what to do. I called up my father in Kolkata who told me to leave the city immediately. A friend and I had to take a late-night train to Delhi. The next morning, I took an expensive flight to Kolkata,” said the student.

Faizul Hasan, former AMU students’ union president said some of the students were left stranded on the roads. “Despite repeated requests, the university authorities forcefully vacated the hostels. I don’t know what was the need to push the students into such a situation? And was it wise to even tell students from Kashmir and Assam to go back home?” said Hasan.

The worst part, he said, was the role of the university authorities who allowed the police to rampage in the campus and beat the students. “

Even in a meeting with the district officials, the mayor and other student leaders, Vice-Chancellor Tariq Mansoor said that if need be, he would call the police again and again in the campus,” Hasan said.

Mander, who met the university registrar Abdul Hamid, a serving IPS officer, said the latter was ‘upbeat’ about the decision to invite the police in the campus and defended it as 'any policeman would'.

Aligarh Muslim University public relations officer, Shafey Kidwai, however, said the outsiders in the protest gave it a violent turn, in the face of which the university authorities had to seek help from the police.

“We had said that about 75 per cent of them (protesters) were outsiders, who were hell-bent on creating trouble. Our stand was vindicated when it emerged that out of 27 students the police had picked up, 20 were outsiders,” said Kidwai, who is a professor of mass communication in the university.

The university also arranged and paid for the buses to ferry students to their hometowns within 350 km radius, he added. Some eight buses were arranged for Jammu as well.

Najmul Islam, the honorary secretary of AMU teachers’ association, too, condemned the police violence against students. “I don’t support acts of vandalism – most of which were done by the outsiders – but the situation could have been handled in a better manner. The police could have used water cannons to disperse the crowd. What was the need for firing a tear gas shell into a hostel room?” said Islam, a professor of biochemistry.

He, however, refrained from criticising the decision of the AMU authorities to allow police into the campus. “I am not saying whether it was right or wrong. We have asked for a judicial inquiry into the incident. It will find out the facts. But we must remain focused on our opposition to the CAA,” said Islam.

Other teachers Outlook spoke to were more forthright in their criticism of the university authorities.

Aftab Alam, a professor of political science, said that Vice-Chancellor’s decision to allow police into the campus was "unfair".

“But when we went to express our disagreement with him, he insulted us and even indirectly threatened to suspend us,” said Alam, who is also a member of the university’s executive council.