AMU Students Protest Against Rising Crime Against Women In UP

The protestors carrying 'Mashaal' (torches) on Thursday evening marched from duck point crossing to Bab-e-Syed gate at the entrance of the campus where police had been deployed in large numbers. 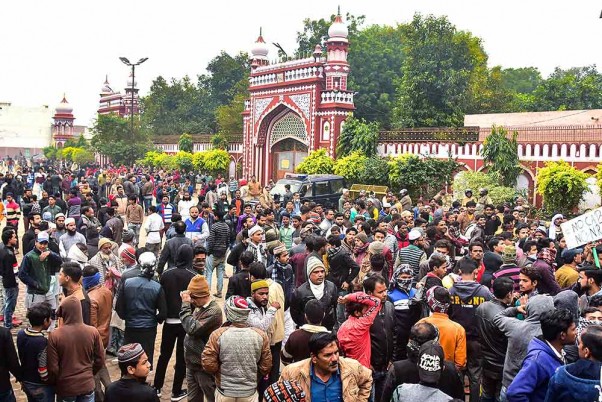 Aligarh Muslim University students held a protest against "rising crime against women and violation of human rights" in Uttar Pradesh.

The protestors carrying 'Mashaal' (torches) on Thursday evening marched from duck point crossing to Bab-e-Syed gate at the entrance of the campus where police had been deployed in large numbers.

They handed over a memorandum addressed to President Ram Nath Kovind demanding the removal of the UP government over "the breakdown of law and order" to city magistrate Ranjit Singh.

The students also demanded that "fast track courts should be set up in every district and law amended to make rape punishable with death".

The memorandum stated that the figures of crime against women released by the National Crime Records Bureau for the year 2019 for the country as well as for Uttar Pradesh were a "shocking indictment on the current state of affairs".

It said crime against women had on average "risen by 20 percent last year".

Memuna Ansari, former secretary of AMU Women's College Students Union said, "The central government had been busy introducing laws on Citizenship (Amendment) Act, but failed to bring in legislation to protect women and other vulnerable groups."

AMU student leader Farhan Zubairi said if there was no response to the students' demands within 48 hours, they would hold a dharna at the offices of the district magistrate and police chief.