‘I contemplated travelling to the airport dressed as an Afghan sporting the customary long beard and turban or a deaf and mute person’. 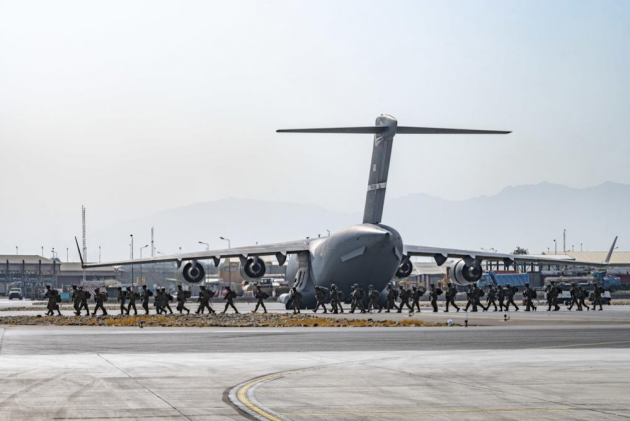 He mumbled a silent prayer for finally making it to a New Delhi-bound Kam Airlines flight at Kabul Airport in war ravaged Afghanistan.

It was just before the Taliban entered the city on August 15, Subrata, an Indian working in a senior position of an International NGO (INGO) posted in Afghanistan.

He had been able to board the flight, after travelling for two hours in his car to travel the 12 km distance between his lodging and the Hamid Karzai International Airport as the road was clogged with vehicles even early in the morning.

To top it all, his flight was stopped from taking off for over an hour almost at the edge of the runway, as US Air Force planes were landing to evacuate nationals of that country, sparking fears of imminent Taliban entry into the city.

Hours earlier, Subrata, who prefers to go by his first name, spent a tense and sleepless night planning his disguise to make it to the airport without any trouble.

"I contemplated travelling to the airport dressed as an Afghan sporting the customary long beard and turban or a deaf and mute person. I was afraid that I might be held by the Taliban in the check posts they might have put up on the road," he told PTI over the phone from Delhi.

Subrata even tried out his disguises before discarding each of them and deciding to travel in his normal clothes.

There were Indians, Europeans and Africans besides people from Afghanistan in the plane who were leaving the strife-torn picturesque country.

Afghan stewards of the plane, however, were sceptical about their return.
“I heard a steward whispering in Pashto: God knows how and when we will return to Kabul',” said Subrata.

On the night before he took the flight, Subrata realised that guns alone cannot ensure security and information is the strongest defence.

"I had no information that night whether the Taliban had already entered the city. Nobody goes out in the night for fear of being attacked and killed. And there were looters.

"I left my lodging at dawn to travel the 12 km distance to the airport and reached it at around 6.15 am. The flight was scheduled to depart at 10.45 am,” Subrata, who had been posted in Afghanistan since 2015, said.

He had advanced his flight ticket to Delhi, where his family stays, after the security officer of his organisation told him that the Taliban were expected to enter Kabul soon and he should “just leave”.

Subrata had been hesitating as he, like many of his counterparts in other INGOs, was sure that Kabul will not fall before Muharram on August 20.

It turned out later that his was the second last commercial flight to leave Afghanistan for India.

“The situation in Kabul had become tense since August 13 as the Taliban had captured Herat, Kandahar, Kunduz and other provinces one by one by then. I think even the Taliban themselves did not expect that these provinces would fall so fast,” said Subrata, who has been posted in that country since 2015.

With the memory of Taliban torture during its rule two decades ago still fresh in their mind, the people of Afghanistan had been living in fear since the US peace deal with the group in Doha in February 2020.

The pact had drawn up plans for withdrawal of US troops from Afghanistan in exchange for security guarantees from the terrorist outfit.

Subrata said that many Afghan people – both men and women - had requested him to help them find refuge in Delhi.

“I did not want to return home before August 18 as I had reached Kabul only a week back and had a lot of work left. But the scenario was changing fast. I was told that banks had downed shutters saying they had no money left," he said.

Rumours that fresh passports were not being issued anymore fanned the fear among the people manifold.

Subrata could not contact the Indian embassy and to add to his fears, he was told that there were blasts at Pul-e-charkhi jail in Kabul, which is the largest prison in Afghanistan, allegedly to liberate jailed members of the Taliban.

“I saw the narrow streets of Kabul chock-a-block with cars of internally displaced people who had come with their families to the city from neighbouring areas thinking it would not fall. The parks were occupied by these hapless people who had nowhere else to go,” he said.

They had been coming for the past one month but the situation had turned chaotic on August 14 as the roads were completely blocked, he said.

Subrata also recounted his conversation with a kiosk owner at the airport from whom he used to buy biscuits and cakes during his frequent travels.

“The man looked very sad. He told me: 'Please remember that Afghanistan is a beautiful country but has no luck as far as lasting peace is concerned'," Subrata said.

There was an air of desperation, a feeling of helplessness, arising out of the fear of an uncertain future.

"People are tired of the constant insecurity and want to leave the country. Their agony is increased manifold by the frequent attacks of armed looters who find them easy prey and do not hesitate to kill if faced with resistance," he said.

The losses due to the unprecedented drought and the havoc wreaked by COVID-19 appear to have taken a back seat in the mind of the people of Afghanistan, Subrata said.

Most of them wish to relocate to either the US or India as they perceive these countries as peaceful and stable, he said.

Asked whether he would like to return to Afghanistan, Subrata said he would, as there is a lot of work left to be done.

“The INGOs are into the development work in the country in a big way. They are building roads, bridges, hospitals which the government cannot," he said. (With PTI inputs)