An Ode To Sindhutai Sapkal aka ‘Mai’

As the country mourns the death of Padma Shree awardee Sindhutai Sapkal, Outlook looks at the strength of a mother, second to none, and her journey from being an unwanted child to becoming a 'Mai' to thousands of orphaned children. 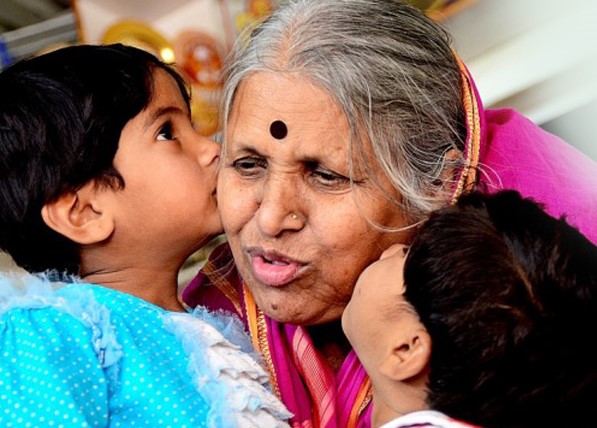 Sindhutai Sapkal never had an easy life. Mother to a thousand orphans, she was fondly called ‘Mai’. Going back to her early days, she was born in a poor family in Wardha, Maharashtra. Being the unwanted child in the family and probably this step child treatment at her own home made her realise that every child needs to be treated with dignity. Her father, being a forward-thinking man, wanted to educate her, but her mother was not in favour of spending on her education. She always wanted to be educated so when her family didn’t provide her a slate, she used Bharadi tree leaves to practice writing.

Sindhutai was married off to a man who was twenty years elder to her at the tender age of twelve. Her husband never respected her and when she was pregnant for the fourth time, a landlord spread rumours of her infidelity in the village. Believing the landlord, her husband had beaten her up so badly that she was semi-conscious and that day she gave birth to her daughter in a chow shed. In an interview with India Today Sindhutai mentioned how she cut her umbilical cord with a sharp-edged stone. Soon after giving birth on that very day, she went to her parent’s house for help, but her mother humiliated her and shooed her away.

But life had to go on and a living had to be made, if not for herself she had to feed her baby. With no options left, she started begging in trains and on the streets. It was during her difficult times that she came in touch with orphan children and wanted to do something for them. It wasn’t an easy journey for her, but Sindhutai set up her first Ashram in Chikaldara, Amravati. Her first NGO, Savitribai Phule Girls’ Hostel, was also formed and registered in Chikaldara. No matter how much hardship she had to go through, the happy faces of her kids kept her going. She had once mentioned how hunger made her speak and it was her communication skills and her gift of the gab because her primary source of income.

It was much later in her life that her husband came to her and apologised for his ill-treatment towards her. She had forgiven him and accepted him as her eldest child. Known particularly in raising orphan children, Sindhutai won several awards for her social work. The fact that Sindhutai was never accepted in her own family whether it was her parents or her husband, she always wanted to adopt orphaned children. It was never easy for her, but life has always been a struggle for her and it was this struggle for survival that helped her shape into the person she was. In fact, it was the hard times that made her stronger. Being an unwanted child, she valued each and every child that she adopted.

Sindhutai had received several awards at national and international level for her work. In 2010, a Marathi biopic of Sapkal titled ‘Mi Sindhutai Sapkal Boltey’ was released in Maharashtra. Her life is an inspiration for all the mothers to struggle to bring up their kids single handedly. Sindhutai Sapkal breathed her last in Pune on Tuesday at the age of 74.