Praja Vedika (people's grievance cell) was built by the then TDP government, as an extension to then Chief Minister Chandrababu Naidu's residence in 2017. Built at a cost of Rs 5 crore, it was being used by Naidu for official purposes as well as to hold party meetings. 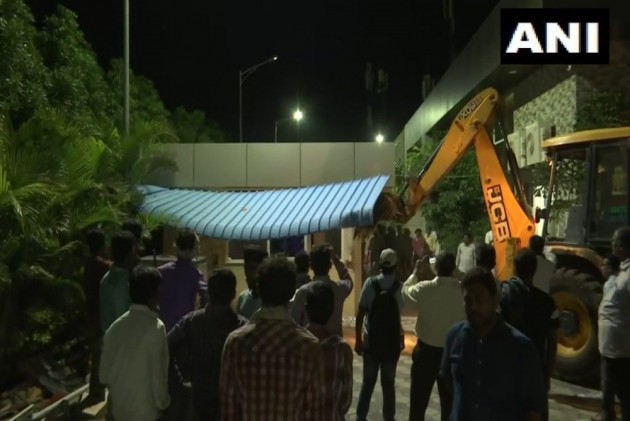 Demolition of a building adjacent to former Chief Minister N. Chandrababu Naidu's residence on the banks of Krishna river in Amaravati continued in full swing, amid tension and tight security on Wednesday, as the Andhra Pradesh High Court rejected the plea to put a stay on the demolition.

After razing boundary wall, pantry, dining hall, toilets, and other structures on Tuesday night, the officials began demolishing the main building of 'Praja Vedika', built by then Chief Minister Naidu in 2017 to hold official meetings.

He announced that his government's drive against unauthorized constructions will begin with the demolition of this building built in river bed in violation of all norms.

Amid a tense atmosphere at Undavalli, workers continued the demolition through the night, even as Naidu returned from his foreign trip and drove to his house. Police diverted traffic to prevent other leaders and workers of Telugu Desam Party (TDP) from reaching the area.

A public interest litigation filed by social activist P. Srinivas Rao, was heard by a division bench of the High Court after 2.30 a.m. Alleging that the public money was being wasted with the demolition, the petitioner sought immediate orders to stop it.

The court declined to pass the stay orders and adjourned the hearing by two weeks.

Praja Vedika (people's grievance cell) was built by the then TDP government, as an extension to then Chief Minister Naidu's residence in 2017. Built at a cost of Rs 5 crore, it was being used by Naidu for official purposes as well as to hold party meetings.

As TDP lost power to YSR Congress Party (YSRCP) last month, Leader of Opposition Naidu on June 4 wrote to the Chief Minister to allow him to use the building to hold the meetings.

In a dramatic development, the YSRCP government took possession of the building on Saturday, and decided to hold two-day meeting of District Collectors and SPs at the same venue.

Jagan Reddy on Monday said that since this building was built in violation of all laws and rules, his government will demolish it on Wednesday. He reiterated this on Tuesday and alleged that even the house where Naidu is living is illegal.

The Chief Minister said all the constructions, which have come up on the banks of the river in violation of various legislation and rules, would be demolished.

Reacting sharply to Jagan Reddy's decision, the TDP has called it vendetta politics. Claiming that the building was constructed by the government as per the rules and regulations, the opposition party alleged that the Chief Minister ordered its demolition so that their leader does not get it.