Anna Hazare Hospitalised Due To Lack Of Blood Supply To Brain

Social activist Anna Hazare broke his week-long fast on February 5 but was admitted to a hospital after complaining of weakness due to lack of blood supply to his brain on Thursday. 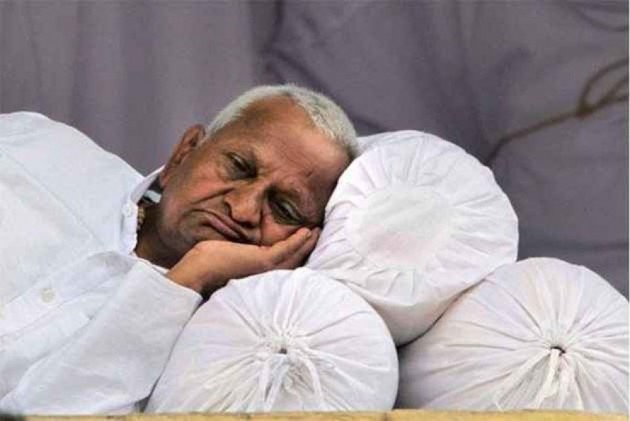 Social activist Anna Hazare broke his week-long fast on February 5 but was admitted to a hospital after complaining of weakness due to lack of blood supply to his brain on Thursday.

Hazare, 81, fasted over his demand for appointment of anti-corruption watchdogs.

"Anna is suffering from weakness and other health issues due to lack of blood supply to his brain," Dr Bapu Kandekar, who examined the activist, said.

Anna Hazare Calls Off Fast Over Lokpal, Says Happy With Outcome Of Talks With CM Fadnavis

Hazare, who lives in Ralegan Siddhi village in Ahmednagar district, complained of some health problems and was brought here in the morning, his aide said. He underwent an MRI (magnetic resonance imaging) scan at a diagnostics centre here.

He was later admitted to a private hospital here as suggested by doctors, Hazare's aide Shyam Asawa told PTI.

Hazare has been suffering from neurological problems for the last two days, Asawa said.

The anti-corruption crusader had begun his fast on January 30 and called it off on February 5 after a marathon meeting with Maharashtra Chief Minister Devendra Fadnavis and two Union ministers at his village.

He lost almost 5 kg weight during the agitation.

The activist has sought appointment of Lokpal at the Centre and Lokayuktas in states where such statutory anti-corruption watchdogs do not exist and resolution of farmers issues.

He has also been demanding implementation of the Swaminathan Commission recommendations on ways to address agrarian distress, besides electoral reforms.