Mukesh Sahani's exit is a setback to the Mahagathbandhan, which is hoping to put up a united fight against Nitish Kumar-led NDA in this election. 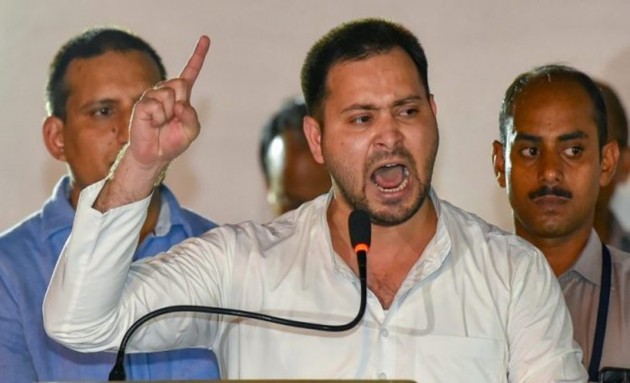 The RJD-led Mahagathbandhan received a big setback when one of its constituents, Vikassheel Insaan Party (VIP) chose to quit the alliance amid dramatic scenes at a joint press conference convened to announce the number of seats in Patna on Saturday.

Shortly after Tejashwi Prasad Yadav announced the seat-sharing formula, VIP president Mukesh Sahani stormed out of the presser, saying he had been backstabbed by the RJD. “I happen to be the son of extremely backward caste and whatever has happened to me today is like a dagger being stabbed in my back,” he said before walking out along with his slogan shouting supporters.

The dramatic scenes followed minutes after Tejashwi, the chief ministerial candidate of the grand alliance announced that as per the seat-sharing formula for the ensuing assembly elections in Bihar, the Congress would contest from 70 seats and also field its candidate- in the by-election to the Valmiki Nagar Lok Sabha seat (which has fallen vacant after the demise of its sitting JD-U MP, Baidyanath Prasad Mahto). “The Left parties -- CPI-ML, CPI, and CPM – will contest from 19, six and four seats respectively,” he said.

Tejashwi also announced that out of the remaining 144 seats, RJD would accommodate VIP and Hemant Soren’s Jharkhand Mukti Morcha (JMM) and their number of seats would be announced in a day or two. “For our greater cause to oust the Nitish government, which has failed on all fronts, all of us should be ready to sacrifice,” he said.

This, however, did not go down well with Sahani, a leader from the fishermen community. When he stood up to speak, he expressed his anger and decided to quit the Mahagathbandhan immediately.

Sahani is the third leader after Jitan Ram Manjhi of the Hindustani Awam Morcha-Secular and Upendra Kushwaha’s Rashtriya Lok Samata Party to have quit the alliance ahead of the Bihar elections.

Sahani, who was expecting to get 15-20 seats in the alliance, later said that he was kept in the dark about the number of seats to be given to his party. He says he has not decided on the future course of action yet. “All my options are open,” he said. “I will declare my next course of action after consulting party leaders at 11 a.m. on Sunday.”

Sahani’s exit is a setback to the Mahagathbandhan, which is hoping to put up a united fight against Nitish Kumar-led NDA in this election.