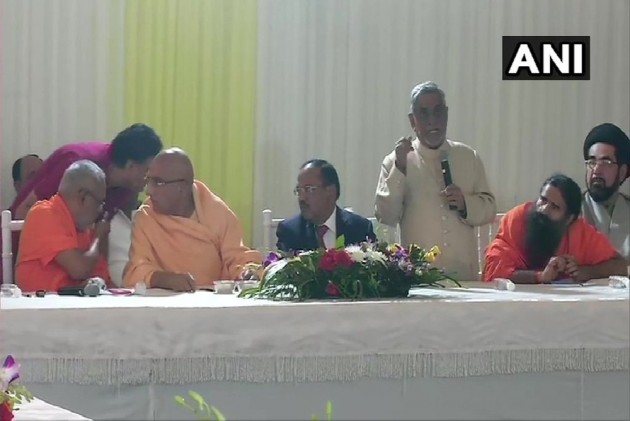 National Security Advisor Ajit Doval held a meeting with eminent Hindu and Muslim religious leaders on Sunday, a day after the Supreme Court verdict in the Ayodhya case, officials said.

They appealed for maintaining peace and tranquillity amidst apprehensions that some anti-national elements may try to "exploit the situation".

The religious leaders pledged unstinted support to the government in all steps to maintain peace and order, they said.

"Those attending the meeting were alive to the fact that certain anti-national and hostile elements, both within and outside the country, may attempt to exploit the situation to harm our national interest," according to a joint statement issued after the four-hour meeting at Doval's residence here.

Religious leaders from across the country and members of the Hindu Dharmacharya Sabha and Vishwa Hindu Parishad attended the meeting.

The participants lauded the government and the people for ensuring harmony after the apex court verdict on Saturday.

Settling a fractious issue that goes back more than a century, the Supreme Court in a historic verdict on Saturday backed the construction of a Ram temple by a government trust at the disputed site in Ayodhya and ruled that an alternative five-acre plot must be found for a mosque in the Hindu holy town.

"The interaction helped to strengthen communication between top religious leaders to maintain a spirit of amity and brotherhood amongst all communities," the statement said.

All the participants reposed full faith in the rule of law and the Constitution, it said.

"The leaders resolved to honour the decision of the Supreme Court and appealed to all countrymen to abide by it, emphasizing that the national interest overrides all other considerations. They extended their full cooperation to the government in ensuring peace, communal harmony and upholding the rule of law," it said.

The religious leaders pledged their "unstinted support" to the government in all the measures it may take to maintain peace and order in the society, it said.

The leaders noted with satisfaction that millions of Indians, belonging to both communities, displayed a great sense of responsibility, sensitivity and restraint in accepting the court verdict, it said.

All the participants appreciated the initiative and emphasized the need for a continuous dialogue between various communities in future, it said.

They complimented the government for ensuring the safety and security of every individual, it said.

There are some people who may want to create disturbance and this meeting was to ensure that such people do not succeed, Swami Parmatmananda Saraswati said after the meeting.

"Everyone expressed resolve to ensure harmony in the country by appealing to their respective followers. In the digital world, there are many in the country and abroad who want to create a disturbance. The meeting was to discuss proactive steps to check such elements," he told PTI.

"We thank NSA Ajit Doval for calling this meeting. We support such initiatives. Time has come that Hindu-Muslim issues should end and everyone contributes to building the country and improve education and eradicate poverty," he said.

Swami Chidanand Saraswatiji of Parmarth Niketan in Rishikesh said that solution to every problem in the country lies in the Constitution and it was discussed how can a formal arrangement be set up under which such discussions can continue.

"9/11 of the US was to divide people, this 9/11 (referring to judgement) to bring people together. The meeting was to analyse the judgement of the Supreme Court. My view was that the Supreme Court decision has ended differences," he said.

He said participants are followers of different sects in the country.

"We may not be able to pray together but we can work towards securing country, humanism, soil, environment together," he said.

"We have been saying that they will honour the verdict of the Supreme Court. When the day came whatever was said about became clear. All apprehensions about law and order post-Supreme Court verdict were proven wrong," Maulana Asghar Ali Salafi, President, Markazi Jamiat Ahle Hadees Hind.

The appeals made by Hindu and Muslim organisations and efforts of the government delivered results, he said.

"This meeting was scheduled before the date of the verdict was announced. Now it is taking place after the verdict, it has strengthened the resolve and appeal of Hindu and Muslim spiritual leaders for peace," he said.

Yoga guru Ramdev said, "Even if there are some questions we will honour the verdict of the Supreme Court to uphold the unity and integrity of the country. This was the most important resolve taken in the meeting."

He said that those who want to divide Hindus and Muslims will not succeed.

Shia cleric Maulana Syed Kalbe Jawad said it is remarkable the countrymen have ensured peace and tranquillity after the verdict.

"Not a single disturbance was reported from anywhere. We discussed ways to formalise this arrangement so that dialogue can continue between the two communities and differences can be sorted through discussions," he said.