Bollywood actor Anupam Kher gets nostalgic in his hometown 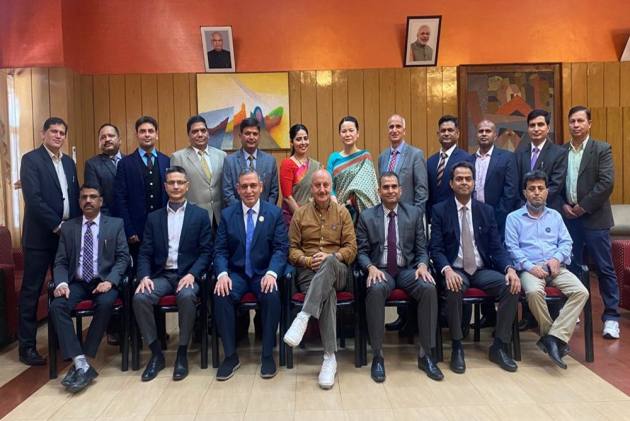 Veteran actor Anupam Kher went down memory lane when he visited the Himachal Pradesh capital. Kher took to social media on Wednesday to inform that he is headed for his home in Shimla after a gap of two years. The actor is accompanied by his mother Dulari Kher. He also shared a video where he is seen walking hand in hand with his mother inside Mumbai airport.

On reaching Shimla, Kher went to the Himachal Pradesh Police Headquarters for interaction with Director General of Police Sanjay Kundu and his team of additional DPGs.

Kundu says, “Anupam Kher shared his experiences from the time he lived with his joint family at the Nabha Estate in Shimla and how his frequent visits in the town kept him emotionally connected with Shimla and his old friends, few school mates and theatre enthusiasts.”

He also spoke on the importance of the power of dreams and hopes and women's empowerment.

Thank you DGP #SanjayKundu ji & other illustrious police officers of @himachalpolice for your appreciation & graciousness. It was a humbling experience to be honoured by you all. I had a wonderful time chatting with you. Keep up the great work you all are doing. Jai Ho!! ððºð pic.twitter.com/P2c7b588q1

Kher spoke about the role played by the police during the Covid-19 lockdown as they were engaged in enforcing the guidelines and regulating tourists’ movements from Parwanoo to Shimla.

He presented Kher a Coffee Table book 'Veerangana' which was unveiled earlier this year on International Women’s Day.

Kher spent around two hours at the PHQ and interacted with staff on several issues.

On Wednesday, Kher was in Solan and spent time with one of his school friends Anil Dutta.

“We are meeting after 50 years with my wonderful friend Anil Dutta. He was always first in the studies and I was last in the ranking. I am nostalgic about all those memories of school,” he said at his house at Solan.