The BJP seems to be making a new experiment in Himachal Pradesh. 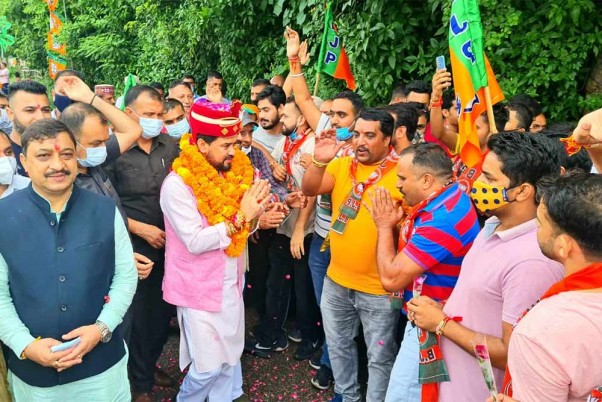 Hundreds of BJP workers and leaders waiting along entire pre-decided route till 2 am, clearly puts Anurag Thakur, the Union information and broadcasting minister and the minister for youth affairs and sports, in the limelight. Many of them see him as future Chief Ministerial choice for the state while others see him in the erstwhile role played by Prem Kumar Dhumal, two-time Chief Minister, in building-up the party in 1990s –a post Shanta Kumar era.

BJP senior Shanta Kumar stepped out of his home for the first-time in Covid-time to receive Thakur at Kangra’s borders. Chief Minister Jai Ram Thakur accorded Thakur a warm welcome on behalf of the state government in Shimla. BJP state president Suresh Kashyap has been following him like a shadow.

Dr Monika To Take Over As SP Shimla

Three-and-a-half year of the BJP rule in Himachal Pradesh-- after Dhumal lost his election and could not occupy the Chief Ministerial post-- has seen emergence of a second line leadership with Jai Ram Thakur rising to the BJP’s horizon for replacing six-time former Chief Minister Virbhadra Singh’s rule .

In the state where the incumbent party never returns to power after five years, the BJP seems to be making a new experiment in Himachal Pradesh after frequent leadership failures and replacements in Uttrakhand, the neighbouring hill state.

Where does Anurag Thakur fit in the new frame of things in Himachal Pradesh? .There is no doubt that he is not, right now, being tipped for leadership –a message Anurag Thakur also tried to send during ‘Jan Ashirwad yatra’ but the event (the yatra) has not missed its target to rejuvenate the party ranks and workers feeling alienated in the in current dispensation of things .

With J P Nadda, the BJP national president, also hailing from Himachal Pradesh, the party is not taking chances to lower its guard.

Thakur praised Prime Minister Narendra Modi, the policies of the central government and his (Modi) interest in Himachal Pradesh. What missed more through the voices at his yatra was Jai Ram Thakur’s report card.

At Hamirpur, his hometown, the BJP workers went public to underline their demand for Prem Kumar Dhumal to contest next assembly poll, slated in October-November 2021 and avenge his 2017 defeat at Sujanpur –a seat he lost to his own protege Rajender Rana (now in Congress) .

The ‘Jan Ashirwad Yatra, which most newly inducted union ministers undertook in the home states, may have different meanings in  their respective states but Himachal Pradesh, as the party camps see, has re- energised the BJP cadres, who had chosen to sit back  home and had disillusionment with their own government .

For the Congress, which struggles its way to put-up an opposition against the well-entrenched BJP, the task to come back to power in the next assembly polls, could really be tough in absence of a leadership it had in late Virbhadra Singh, who died last month.