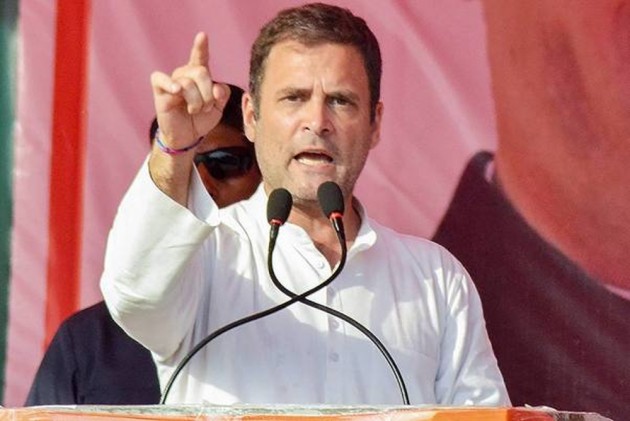 The exit polls have unanimously predicted a landslide win for the Narendra Modi-led NDA coalition but with the actual results of the Lok Sabha polls expected, on Thursday, the anxiety within the Congress-led UPA combine is palpable.

Would it be as bad as the pollsters have predicted? Can it really be as bad? After a deafening silence for the past three days, ever since polling for the final phase of the election ended and multiple media channels screamed the return of Modi, Congress president Rahul Gandhi finally commented on the exit polls on Thursday.

Reaching out specifically to his party workers in what sounded more like a mix of caution and conciliation than an avowal of confidence, Gandhi said in a tweet: “The next 24 hours are crucial. Stay alert. Don’t fear. You have fought for the truth. Don’t be disheartened by the misinformation of the exit polls. Trust yourself and the Congress party. Your efforts will not be in vain.”

The message from Gandhi is in stark contrast from the bombast and bluster emanating from the BJP camp. But then, there isn’t anything unusual about this. Even as campaigning for the final phase of polling was coming to an end on May 17, the Congress president had refused to directly answer questions by prodding media persons on the number of seats he expects his party to win. “Let us wait for May 23… I don’t wish to pre-empt the will of the people,” he had steadfastly maintained.

Does this betray nervousness over what the outcome holds or a quiet confidence, stemming from an uncharacteristically good campaign by the party, of a substantial electoral revival, if not a full scale resurgence? Going by the doldrums that the Congress party has been in for almost the entire period of the past five years, reasons to accept the former thought are many.

The nervousness, if it is that, will not be misplaced. The political footprint of the Grand Old Party has been shrinking. In many states it is hard to find. Losses in successive state assembly polls, defections of senior and middle rung leaders to the BJP and other rivals, an arrogant stubbornness to accommodate allies where its own organisational capabilities have been on a steady decline and the inability to set a new political narrative have collectively led this within the Congress to such a pass.

The Lok Sabha poll campaign did see the Congress attempting some course correction, though belated and lacking in the required aggression. It would be fair to say that Gandhi, for once, led a high-pitched campaign against Modi. He did not allow the BJP to engage the Congress into arguments over nationalism, internal security issues or matters which could have polarized the electorate. Gandhi stood his ground on the issues he believed mattered in this election – unemployment, agrarian distress, economic crisis, and yes, corruption in the Rafale deal – and his ‘Chowkidar Chor Hai’ assault on Modi was lapped up by almost every other Opposition party, irrespective of it being a member of the UPA or not.

While the Rafale deal may not have been a vote-winner, Gandhi’s stress on lack of jobs, agrarian distress and the economic crisis in all his poll speeches did seem to succeed in making a contest out of an election, which until two years ago was seen to be a one-sided affair titled heavily in favour of the BJP. It is a pity for the Congress president, though, that his sharp attacks against Modi and the BJP were not matched in their velocity by his party colleagues, many of whom appeared resigned to defeat. Of course, the jury is still out on whether anything that Gandhi did in these elections actually succeeded in stemming the rot that has set in his party.

The Congress party’s allies, however, entered the election gamble with every chip they had. The mahagathbandhan in Bihar with Lalu Yadav’s RJD, Upendra Kushwaha’s RLSP, Mukesh Saini’s VIP and Jitan Ram Manjhi’s HAM saw Lalu’s son Tejashwi forcefully campaign against the BJP-JD (U)-LJP alliance in almost every one of the 40 constituencies of the state. Similarly, in Tamil Nadu, DMK chief M.K. Stalin unleashed the full force of his party’s well-oiled election machinery to take on the weakened and faction-ridden AIADMK-BJP combine.

In Maharashtra, reports suggest that the Congress-NCP coalition, with added help from an unexpected and not necessarily kosher ally – Raj Thackeray – put up a good fight with the politically astute Sharad Pawar acutely monitoring every aspect of the joint-campaign strategy. Though the Congress-JD (S) alliance in Karnataka seemed to falter owing to the ambitions of some leaders from both parties who saw the pre-poll pact as being detrimental to their personal political futures, the campaign seems to have gone off without many glitches, barring in some constituencies.

But the exit poll prediction of a rout, the piercing campaign notwithstanding, followed closely by visuals from across the country of suspicious handling and movement of EVMs in vehicles that were arriving at or departing from strongrooms without the mandatory security escort has definitely given the Congress and its allies a scare.

Gandhi and his mother, UPA chairperson, Congress sources say, have been in regular touch with senior party leaders and representatives of various allies and non-aligned parties like Chandrababu Naidu’s TDP, Mayawati’s BSP, Akhilesh Yadav’s SP, Mamata Banerjee’s Trinamool Congress and the Left Front constituents ever since the last phase of polling ended. In the event that the actual results, on Thursday, do not reflect a recurrence of the Modi tsunami projected by the exit polls, the huddle within the Congress and its UPA allies to cobble up support of non-aligned state parties for an alternative government will expectedly see a march to the Rashtrapati Bhavan. Or, it could just as well be to the Supreme Court, if the verdict doesn’t throw up a clear winner but Modi gets invited to stake claim with a substantial breather to prove his majority on the floor of the Lok Sabha.