The head of Lord Rama's idol at the famous Ramateertham hill temple was found defaced on December 28 night. 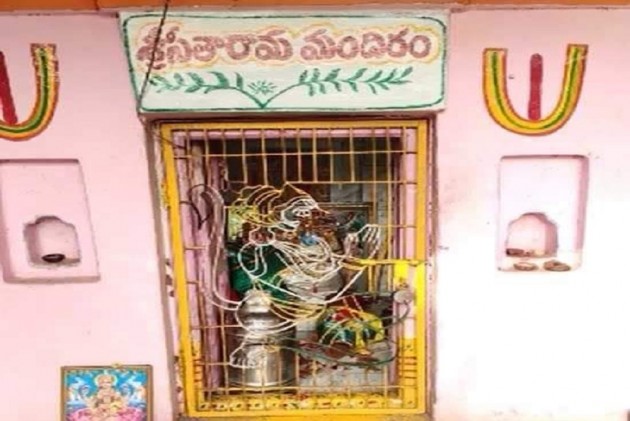 Andhra Pradesh BJP president Somu Veerraju and several party leaders were arrested on Tuesday when they attempted to take out a yatra in Ramatheertham protesting the desecration of Lord Ramas idol in a temple there last week defying ban orders in force, police said.

The BJP and Jana Sena announced the Ramateertha Dharma Yatra protesting the December 28 incident in which the head of Lord Rama's idol at the famous Ramateertham hill temple in Vizianagaram district was found defaced.

Though initially, the police gave permission to Veerraju and other leaders to visit the Lord Rama temple at Ramateertham, they later withdrew it citing prohibitory orders under Section 30 of the Police Act in force. Police said they arrested the BJP state president and others for violating the prohibitory orders.

The head of Lord Rama's idol at the famous Ramateertham hill temple was found defaced on December 28 night. BJP said several of its leaders were placed under house-arrest in different places. Tension prevailed in the Ramatheertham area as the BJP workers and the police jostled with each other.

A woman leader, Yasaswini, was allegedly manhandled by the police following which she collapsed. Spitting fire over this, Veerraju asked how the police allowed YSR Congress MP Vijaya Sai Reddy and TDP president N Chandrababu Naidu to visit the temple last week and why the BJP and Jana Sena leaders were prevented. They first gave permission for our visit but then they withdrew it. This is atrocious, Veerraju, who is also a member of the state Legislative Council, claimed.

In Visakhapatnam, Rajya Sabha member C M Ramesh and former minister Kamineni Srinivas were not allowed to leave the city BJP office by the police in a bid to prevent them from going to Ramateertham. Former state BJP president Kanna Lakshminarayana and former party MLA P Vishnukumar Raju were placed under house arrest, party leaders claimed.

In several other places too, the BJP and the Jana Sena leaders were prevented from proceeding to Ramateertham in Vizianagaram district, they said. BJP MP G V L Narasimha Rao condemned the arrest of Somu Veerraju and other leaders. Such highhanded actions against peaceful protests, over the beheading of centuries-old Lord Ramas idol, only exposed the ineptness of the Jagan Mohan Reddy government, he said in a statement.

BJP state general secretary S Vishnuvardhan Reddy said they would complain to the Centre against "the police excesses" in the state. "Are the police drawing salaries from the public coffers or from the YSRC office? Human rights are grossly violated in the state and there is severe repression all around," he alleged.

Chief Minister Y S Jagan Mohan Reddy on Monday termed the desecration of temples in the state as ''political guerrilla warfare" and wondered who would benefit by such acts.