Saudi Aramco In Talks With Reliance To Buy Stake In Petrochemical, Refinery 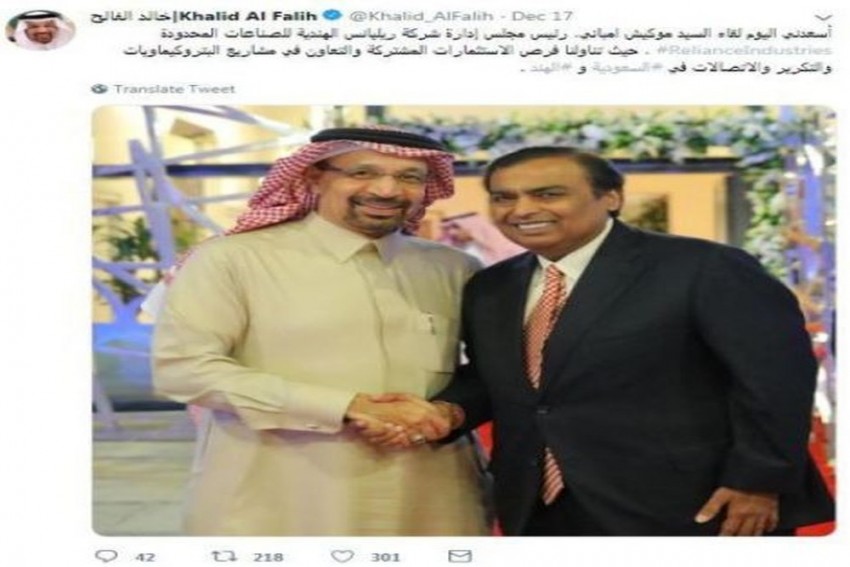 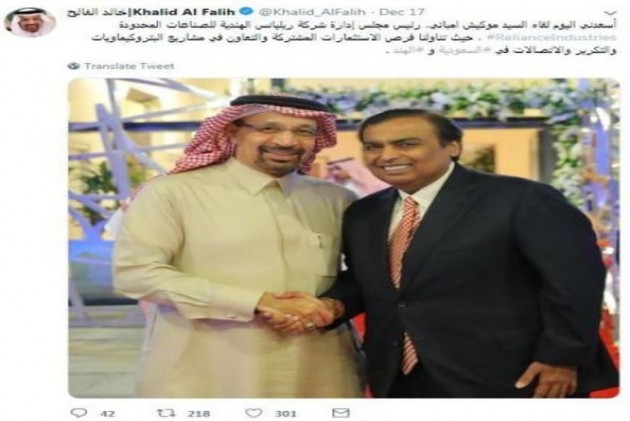 Aramco opened talks with Reliance as a USD 44-billion mega refinery-cum-petrochemical complex, where it was taking a 50 per cent stake along with UAE's ADNOC, got delayed, after the BJP-government scrapped plans for acquiring land for the project in coastal Maharashtra.

The sources said talks have been going on for a few months now but there is nothing concrete that has materialized as yet.

Reports suggested, Aramco may take 25 per cent stake for USD 10-15 billion, but sources discounted such a valuation, saying market capitalization of Reliance at Tuesday's closing price on BSE was over Rs 8.5 lakh crore, at least half of which or Rs 4.25 lakh crore (about USD 60 billion) would be coming from refinery and petrochemical business.

A 25 per cent stake would translate into USD 15 billion without even considering any premium of giving a firm  foothold into a well-established business in the world's third largest energy consuming nation, they said.

Reliance declined to comment on the issue. "As a policy, we do not comment on media speculation and rumours. Our company evaluates various opportunities on an ongoing basis," a company spokesperson said.

"We have made and will continue to make necessary disclosures in compliance with our obligations under Securities Exchange Board of India (Listing Obligations and Disclosure Requirements) Regulations 2015, and our agreements with the stock exchanges,” he added.

Aramco has on multiple occasions in the past, disclosed its discussions with Reliance. The last such comment was on February 20, when its CEO, Amin Al-Nasser visited here as part of a high-level delegation, along with Saudi Crown Prince Mohammed bin Salman.

Al-Falih, who has known Ambani for over a decade now, travelled to Udaipur that month to attend the pre-wedding festivities of Ambani's daughter, Isha's marriage with Ajay Piramal's son Anand.

During the visit, he also held talks with Ambani and he later tweeted, "we discussed opportunities for joint investments and cooperation in petrochemical, refining and communications projects".

In January, Aramco CEO met Ambani, possibly as a follow-up of that meeting.

Reliance operates two refineries at Jamnagar with a total capacity of 68.2 million tonnes per annum.

The company plans to expand its only-for-exports special economic zone (SEZ) refining capacity, to just over 41 million tonnes from current 35.2 million tonnes, but does not have any plans to set up a new refinery in the country.

It is presently focused on expanding petrochemical and telecom business, the sources said.

Crude oil is the basic raw material for the manufacturing of petrochemicals.

Saudi Arabia, on the other hand, is keen to get a foothold in the world's fastest-growing fuel market, to get a captive customer for the crude oil it produces.

Saudi Aramco, the world's biggest oil company, and its partner, Abu Dabhi National Oil Co (ADNOC), have picked up 50 per cent stake in a planned USD 44-billion refinery in Maharashtra, but the project is facing problems in acquiring land due to protests from local politicians.

Aramco and ADNOC will together hold 50 per cent stake in the 60-million tonnes per annum (MTPA) refinery and adjacent 18 MTPA petrochemical complex planned to be built at Ratnagiri district of Maharashtra by 2025. The two will supply half of the crude oil required for processing at the refinery.

Like other major producers, the two are looking to lock in customers in the world's third-largest oil consumer through the investment. Kuwait too is looking to invest in projects in return for getting an assured offtake of their crude oil.

Saudi Aramco is also keen on retailing fuel in India. A refinery in India can also be a base for it to export fuel to deficit countries in Europe and the Americas.