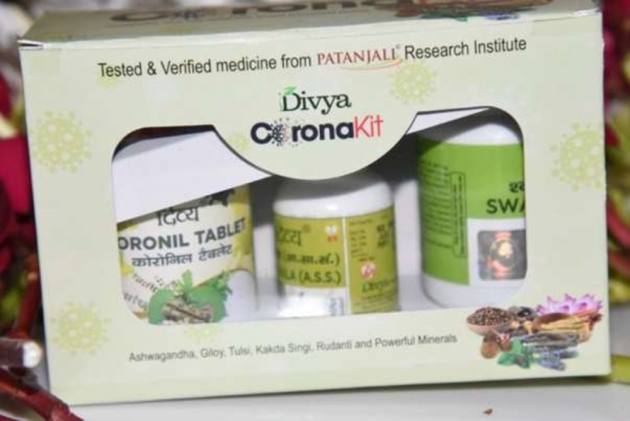 In the middle of the second wave of the COVID-19 pandemic, reports are emerging that hospitals, including Indian Army institutions, are prescribing a product as a cure that the Indian Medical Association (IMA) has called out as a “falsely fabricated unscientific product”.

Coronil, a ‘herbal’ product released by Baba Ramdev’s Patanjali FMCG group, was released with much fanfare, nationalist chest-thumping, and media blitz as an Ayurveda cure for SARS-CoV-2 on June 23, 2020, claiming patients recover from COVID-19 within 14 days of its use.

Since then, despite repeated dismissals by the medical and scientific community, it has received official endorsements at a time when the healthcare system has collapsed from the unavailability of doctors, nurses, equipment, drugs, and even oxygen.

On April 7, 2020, 66-year-old Neela Sinha, a resident of Sasaram, Bihar, and her two sons aged 40 and 29, started showing mild symptoms of Covid. Another son, Ashish Kishore, a salesman with a private firm who lives in Delhi, suggested that his mother and two brothers take Coronil, based on repeated endorsements he had seen on TV. The family followed his suggestion.

But a week later, neither of his brothers showed any signs of improvement. Instead, they now had bruised throats causing difficulty in swallowing. Eventually, on April 14, they tested positive. Then, the mother’s condition began to deteriorate, with SpO2 level reaching 85. “From 7th to 16th they were only dependent on Coronil,” says Rohin Kumar, Neela’s grandson who is an independent journalist in Delhi. Appalled and dejected, the family admitted her to Narayan Medical College and Hospital in Dehri-on-Son, but it was too late to save her.

Anuradha Prasad, a journalist with AltNews, had a similar story. She told Outlook, “One of my childhood friends tested positive On April 13, 2021, we got him admitted to Sonia Hospital in Nangloi, Delhi. The doctor asked his brother to arrange for plasma from Covid-recovered patients, the intravenous antiviral Remdesivir and a Coronil kit.” She added, “Infuriated, I told him to warn the doctor that if he prescribed an uncertified treatment, I’d file a complaint against him.” But for the relative of a person battling life and death, any remedy suggested by a doctor is a glimmer of hope. Anuradha added, “I later found out they were forced to buy and use the Coronil kit because the doctor insisted on it.”

Staff at Sonia Hospital refused to respond to queries on why they recommended Coronil.

Earlier, in September 2020, Rakesh (name changed), a Naib Subedar in the Indian Army posted in Nashik, Maharashtra, contracted Covid. He was admitted to Military Hospital, Deolali. Within a few weeks, he was discharged.

Afterwards, when his cousin Apoorva (name changed), an army officer’s daughter, called him, Rakesh told her, “Unlike what people believe, the treatment I received at  the Army Hospital was unexceptional, except for the Coronil course I was prescribed.” A shocked Apoorva told Outlook, “Since Army hospitals don’t hand over prescriptions to patients, we can’t even question or nail them.”

So how is an uncertified product like Coronil getting prescribed by government hospitals, despite strong warnings about it from apex medical and scientific bodies? Across the country, all military hospitals follow uniform guidelines issued by the central government. “If this direction has been given by the Union government, it’s scary,” said Apoorva.

Outlook tried to contact the hospital and the director (media) of the Indian Army but in vain.

“Since the drug was itself endorsed by the health minister, I cannot comment on it. But according to the National Medical Commission Act, 2019, allopathy doctors are not allowed to prescribe an ayurvedic drug. This is illegal,” said Dr Jugal Kishore, head, community medicine, Safdarjung Hospital. “If any allopathic doctor is doing so, it’s a law-and-order issue”, he added.