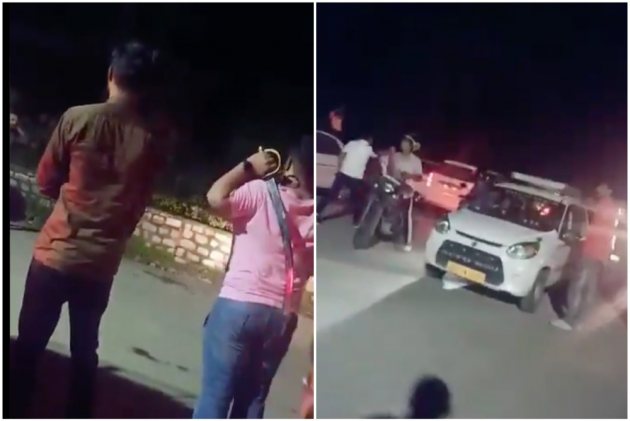 Four tourists, all from Sangrur, Punjab, travelling in an XUV in Kullu-Manali were arrested in Manali on Wednesday night following an alleged attack on the locals with swords.

A fortnight back, tourists from Punjab chopped off a finger of a trader at Manali with a sword after a brawl and fled away. Prior to that, a group of tourists, again from Punjab, flaunted a revolver during an argument with locals on wrong parking and not wearing masks on the Chandigarh-Shimla National Highway.

These are just some instances of side effects of the side effects of  “revenge tourism” as Himachal Pradesh finds itself in a tight spot over law and order situation because of the heavy influx of tourists post lockdown, mostly from the neighbouring states of Punjab, Haryana, UP and UTs like Chandigarh. This is apart from the fact that the tourists refuse to follow Covid appropriate behaviour and gather at crowded places, leading to concerns about the outbreak of the Covid-19 third wave.

Director-General of Police Sanjay Kundu shared his concern over the behaviour of tourists, mostly youngsters not following Covid appropriate behaviour and coming with weapons to create law and order problems – both in terms of traffic mobility and parking, as well as bullying locals.

“We will have to do something about this nuisance being created by the miscreants from our neighbouring states. Not that we won't welcome tourists but will take action against those taking the law into their hands. Movement with weapons in a tourist state, and that too in a peaceful destination, is certainly objectionable” he says

Reports from Manali reveal that four persons—Ravinder,21, Dalbir Singh,28, Amandeep Singh,24 and Jasraj, 23 , who were at Manali, deliberately parked their white XUV with plate number PB 11 CF 0123 in the middle of the road , after they overtook wrongly another vehicle. This resulted in a traffic jam on Wednesday night.

The locals, particularly one Harish Kumar, asked the tourists not to block the traffic or reverse the vehicle to the roadside. The latter refused and eventually started quarrelling with and abusing Kumar. Eventually, one of the occupants of the car stepped out of it with a sword and attacked Kumar.

Superintendent of Police Kullu Gurdev Sharma said FIR under section 147,148,149,323,506 IPC and 25 of Indian Arms Act has been registered and all the accused have been arrested.

The culprits fled from the spot but later their vehicle was intercepted at Koksar in Lahaul Spiti the next day and Mandi police took help from local police to arrest the accused.

Ashwani Bamba, president of Dharamshala Hoteliers Association claims that after lifting the restrictions including RTPCR test and E-pass registrations by the Himachal Pradesh government post lockdown, the tourist influx had increased unexpectedly.

Unfortunately, these are tourists who don’t represent conventional tourists coming from Delhi, Madhya Pradesh, Maharashtra, Gujarat, Rajasthan and West Bengal. The footfall from tourists of Punjab, Chandigarh, Haryana or UP –especially the youngsters, are tough to be handled as usually they also turn rowdy, don’t follow Covid norms and violate traffic rules.

“They are invariably bullying” admits Sushant Patial, a hotelier at Kangra.

Meanwhile, Chief Minister Jai Ram Thakur has ruled out reimposing restrictions on the entry of the tourists in view of the concerns shared by Prime Minister Narendra Modi about tourists rush in the hills .

"Imposing restrictions will create problems for the mobility of the people coming for business, official works or have to travel for medical emergencies outside the state" he said.