In a significant move aimed at reducing tensions, the Indian and Pakistani armies on February 25 last year announced that they would cease firing across the LoC while recommitting themselves to a 2003 ceasefire agreement. 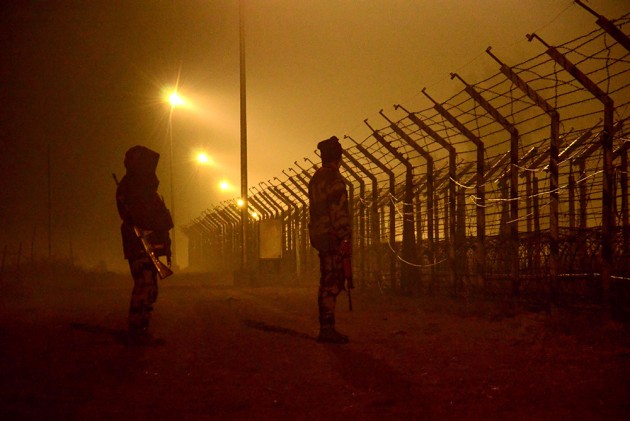 Referring to the continued  practice  of Pakistan's cross-border terrorism in Jammu and Kashmir,  Army Chief Gen. MM Naravane said that Indian Army is resolved to show "zero tolerance" to terrorism and is committed to extracting "dire costs" for it.

Addressing a press conference ahead of the Army Day, he said the concentration of some 350 to 400 terrorists in terror launch pads and training facilities on the other side (Pakistani side) of the Line of Control (LoC) and repeated infiltration attempts "expose" the "nefarious intents" of the adversary.

At the same time, he said last year's ceasefire understanding between the Director General of Military Operations (DGMO) of Indian and Pakistani armies resulted in some improvement in the situation along the LoC.

"Along the Line of Control, after a heightened situation for a prolonged period, the DGMOs understanding in February last year was aimed at achieving mutually beneficial, and sustainable peace," he said.

"Resultantly, the situation has witnessed marked improvement. However, increase in the concentration of terrorists in launch pads, across the LoC and repeated infiltration attempts, once again expose their nefarious intents," he said.

Gen Naravane further said: "We, on our part, have resolved to show zero tolerance to terror, and commit ourselves to extract dire costs, should that be forced upon us," he said.

The Army chief said that the "proxy war" continues as terrorists are still there in the terror launch pads across the border.

"The combined intelligence inputs suggest 350 to 400 terrorists on the other side at the launch pads or in various training camps. This threat has in no way receded. We have to remain alert . A threat on the western front is very much there and cannot be ignored," he said.

On the situation in Jammu and Kashmir, Gen Naravane said a 'whole of government' approach has led to progressive improvement in the security situation.

"Efforts to give an indigenous hue to terrorism, by setting up a façade, of proxy terror Tanzeems, have failed miserably. Inimical elements, re-energised their attempts at disrupting peace in the valley by targeting minorities, and non-locals. However, we have been able to counter these challenges," he said.

Asked whether demilitarisation on the Siachen glacier is possible, the Army chief suggested that it all depends on Pakistan.

"We are not averse to demilitarisation of Siachen glacier. But the precondition for that is to acceptance of the Actual Ground Position Line (AGPL). Pakistan has to accept it," he said.

Gen Naravane said both sides have to sign on the dotted lines before any kind of disengagement takes place. Pakistan has been opposed to accepting the AGPL.

Asked about drones being used by terror outfits in Jammu and Kashmir, he said it is a threat and armed forces are seized of the challenge. He said the drones are being used primarily to transport ammunition and drugs."We are well seized of the issue...Union Home Ministry is very much alive and countering it," he said.