Arnab Goswami was arrested in Mumbai by Raigad police on Wednesday morning for allegedly abetting suicide of a 53-year-old interior designer in 2018. 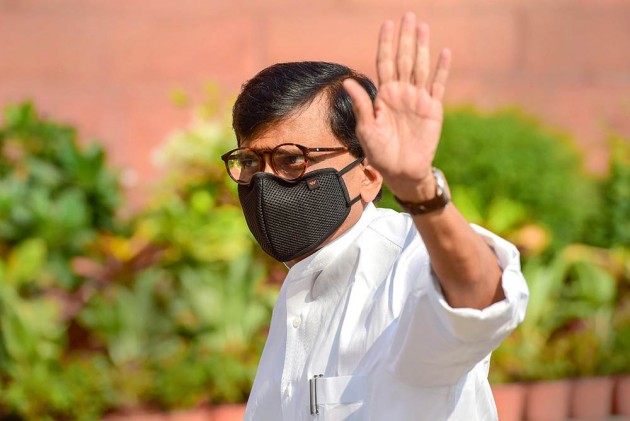 The ruling Shiv Sena in Maharashtra on Wednesday dismissed the opposition BJP's allegations of "politics of revenge" and "muzzling of the press freedom" in the arrest of Republic TV Editor-in-Chief Arnab Goswami in a suicide abetment case.

Sena leader Sanjay Raut told reporters the Maha Vikas Aghadi (MVA) government of the Sena, NCP and Congress has never acted vindictively against anyone since it came to power last year. He also claimed that the state government or any political party had nothing to do with the arrest.

Goswami was arrested in Mumbai by Raigad police on Wednesday morning for allegedly abetting the suicide of a 53-year-old interior designer in 2018.

"Proper procedure of law is followed in Maharashtra. Police can take action against anyone if they have evidence. The state government hasn't acted out of revenge," Raut told reporters when asked about Goswami's arrest.

"There is no anarchy in Maharashtra and law of the land is followed," Raut said, adding that Mumbai police is a professional force.

"It is not a black day for media. Journalists also should follow ethics. Media is not an investigating agency or court. This observation is of the highest court. We are all journalists. Whoever does anything wrong will be punished by the police," he said.

"The state government or any political party has nothing to do with the arrest," the Sena MP said.

Taking a swipe at the BJP, Sena spokesperson and state Parliamentary Affairs Minister Anil Parab told reporters that Goswami's name was mentioned in the suicide note written by the interior designer.

"The Naik family had moved the court and the case is being investigated. Goswami duped the Marathi entrepreneur Anvay Naik due to which he committed suicide. Earlier, the case wasn't investigated two years ago as per the contents of the suicide note.

"The Naik family then moved court and the probe started. Where does the question of the attack on the freedom of press arise?" he asked.

"There is no politics of revenge. The BJP is trying to save Arnab Goswami as if their party worker has been taken away by the police," Parab said while terming Goswami as the "BJP's parrot".

"A Marathi woman became a widow...and the case is being investigated. What is wrong in that? Why is the BJP trying to save him (Goswami)? How can it be called as the state of emergency in Maharashtra when a person booked for abetment of suicide is arrested?" he asked.

Parab said why the BJP was keeping mum on two other persons who were also named in Naik's suicide note and arrested.

Meanwhile, Maharashtra minister and NCP leader Nawab Malik termed Goswami's arrest as "Part 2 of India's Most Wanted" and recalled the action against a TV crime show anchor who was charged with killing his wife.

Suhaib Ilyasi, who had shot into limelight after hosting TV crime show India's Most Wanted was charged with murdering his wife in March 2000. He was, however, acquitted by the Delhi High Court in October 2018.

"Once upon a time there was a show called India's Most Wanted & the Anchor highlighted murders & suicides, the same anchor was held responsible for his wife's murder, Minority Affairs Minister Malik tweeted without naming Ilyasi.

"Here is Part 2 of India's Most Wanted, another anchor doing the same is now responsible for suicide #ArnabArrested, he added on the micro-blogging site.

BJP's state unit chief Chandrakant Patil condemned the arrest saying that it was meant to muzzle his voice for speaking against the Maharashtra government, the Congress and its leadership.

Talking to reporters in Nagpur, he said, "It is the murder of democracy and freedom of speech. Arnab Goswami speaks against you (government), Congress and party chief Sonia Gandhi. But on that basis, you cannot arrest him."

"Reopening this (suicide abetment) case, which was already closed, means it is an attempt to stop the voice of Goswami. The BJP and the people of this country will not tolerate this," Patil added.

He said similar attempts to curb the freedom of speech were also made during the Emergency and Indira Gandhi had to face defeat in the following elections.

"We condemn this incident and a protest led by me will be held in Nagpur. Similar protests will be held at other places across Maharashtra," Patil said.