Both the arrested did escape to Shimla from NRC/Delhi following a series of raids being conducted by the DRI to probe the drug smuggling racket related to the massive drug haul in Gujarat's Mundra. 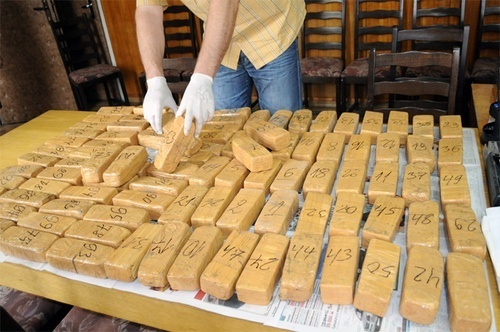 Arrest of two Afghan nationals from a Shimla hotel two days back by a team of Directorate of Revenue Intelligence (DRI) have brought the focus back on the state being used as a new hub by the drug smugglers, including foreigners, apparently a spill over of the Punjab drug problem .

Superintendent of Shimla police  Dr Monika Bhutungru confirmed to Outlook this morning that the DRI team has arrested two persons, both foreign nationals, from a hotel in the heart of the town .

They have been taken back to Delhi after the arrests and completing necessary legal formalities.

Both had escaped to Shimla from NRC/Delhi following a series of raids being conducted by the DRI to probe the drug smuggling racket relating to Mundra post seizure, which is seen as the biggest ever drug haul.

This incident established the Shimla connection associated with the recent Gujarat drug haul that ended in a record seizure of 3000 kg heroin at Mundra port in Gujarat, a week back.

“The Shimla police were kept in loop about the chase and we provided necessary assistance too. Both were apparently staying on some fake IDs pretending themselves to be the natives of NCR/Delhi” she added yet declining to share further details.

The raid was conducted around midnight at Chhota Shimla ,where this hotel is located. Nothing incrementing   was found from their passion except some papers and their fake Aadhar cards .They were actually hiding in the town to give a slip to the investigating agencies following arrest  of some men in their drug smuggling chain .

“Both the arrested persons are key operators in the smuggling of large consignment of heroin from Afghanistan to India” said an official in Delhi.

The value of the heroin seized is said to be Rs  21,000 crore in the international markets .

“The DRI has arrested eight people including five foreign nationals in connection with this case,beside an Indian couple" an official revealed in Shimla.

Only two days back , state’s Governor Rajendra Vishwanath Arlekar ,who was speaking at a public function, had revealed that while he was Speaker of Goa assembly, he had noticed that most of the drug seizures or trafficked at beaches and hotels were coming from Himachal Pradesh .

“ There is only one place which has become infamous for drug smuggling ,and I need not give its name (Kullu as he meant). It's the duty of every citizen to play a proactive role and inform the police and other agencies about the people engaging in the crime as it will spoil the whole generation next” he asked .

In Kullu, a former Superintendent of Police Gaurav Singh,now posted in the narcotic cell of the CID at Shimla, had  filed a record 489 cases ,seized 500 kg of charas and arrested 695 people, 29 of them foreigners including few Afghanis (arrested from Delhi ) ,apart from 43 Nepal nationals.Property worth Rs four crore was also seized of the persons involved in the drug smuggling rackets at Kullu.