Kejriwal will take part in a road show in Surat at 3 pm, beginning from Varracha area and ending at Sarthana, and will also address a public meeting. 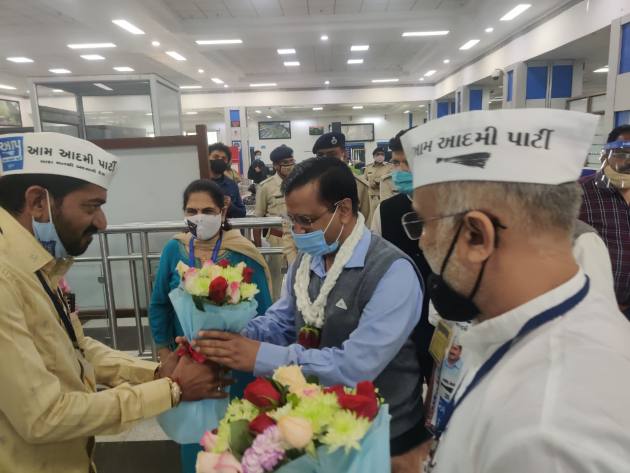 Delhi Chief Minister Arvind Kejriwal on Friday arrived in Gujarat's Surat to "thank" the people of the city, where his party has put up an impressive show by winning 27 seats in the recently-held civic polls.

Kejriwal will take part in a road show in the city at 3 pm. It will begin from Varracha area and end at Sarthana, where he will address a public meeting.

During his visit, he will also meet local office-bearers of his party and the newly-elected corporators.

The AAP has made inroads into Gujarat's politics by winning 27 seats of Surat Municipal Corporation (SMC), one of the six cities where voting was held on Sunday.

Although the BJP has retained power by winning 93 seats in the 120-member SMC, the AAP has become the opposition party by winning the remaining 27 seats. The Congress, which had won 36 seats in 2015, could not bag even a single seat this time.

One of the main reasons for AAP's impressive show in Surat was the support it received from Patidar Anamat Andolan Samiti (PAAS), a quota agitation body once led by Hardik Patel, who is now the working president of Gujarat Congress, political experts said.

Although the PAAS is virtually defunct, two of its prominent members - Alpesh Kathiria and Dharmik Malavia - are still active in Surat and command support of Patidar voters.

The Congress had managed to win 36 seats in Patidarr dominated areas of Surat in the last election, riding on the anti-BJP wave created by the PAAS in 2015.

In this election, those voters turned to AAP due to anti-Congress stand taken by both Kathiria and Malavia, who had openly pledged to defeat Congress in Surat after differences between them and Congress emerged over the issue of ticket distribution, the analysts said.

It was for the first time that the AAP had fielded its candidates in the municipal polls in Gujarat.

Although the party had fielded candidates in all six cities of Gujarat, it managed to win seats in Surat alone.