While AAP leader Sanjay Singh called it the lowest form of remark, the Delhi CM said, 'God bless everyone, even people from the BJP.' 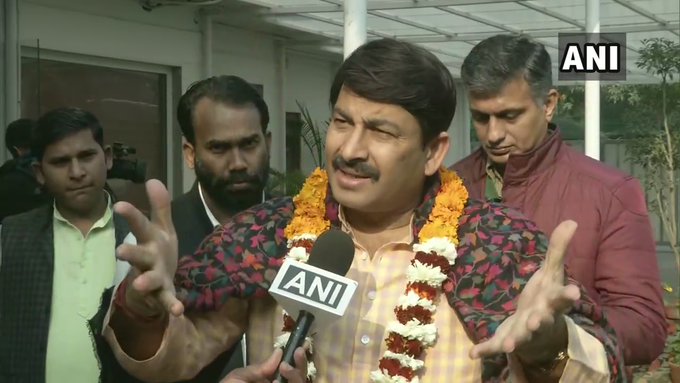 A verbal spat broke out between the AAP and BJP with the saffron party's state chief Manoj Tiwari calling sitting Delhi Chief Minister a "nakli bhakt" on Saturday as polling was underway in the Delhi Assembly elections.

Aam Aadmi Party (AAP) MP Sanjay Singh hit out at Tiwari saying there could not be a lower and disgusting statement than what he said,

Also Read | BJP Has Been Mocking Me Ever Since I Recited 'Hanuman Chalisa': Kejriwal

Kejriwal took to Twitter to say a BJP leader had accused him of making a Hanuman temple "impure" by visiting it and the party has been mocking him ever since he recited the 'Hanuman Chalisa' on a TV channel.

"What kind of politics is this?" he asked. "God belongs to everyone. God bless everyone, even people from the BJP."

A day before Delhi polls, both Kejriwal and Tiwari on Friday paid obeisance at famous temples in the national capital.

Kejriwal, the national convener of the AAP, along with his wife Sunita offered prayers at the famous Hanuman Temple at Connaught Place.

A war of words have ensued between Tiwari and Kejriwal in the run-up to the elections. Earlier in January, the Delhi unit President attacked Kejriwal for “mocking” his song 'Rinkiya Ke Papa'saying the Delhi CM was "insulting" Purvanchalis and their culture.

Kejriwal had taken a dig at Tiwari by referring to him as a singer who made the song 'Rinkiya Ke Papa', when asked for his views about Delhi BJP chief.