Addressing a roadshow in Nasirpur area of West Delhi, AAP chief Kejriwal urged people to vote for the party by pressing the 'jhadu' button. 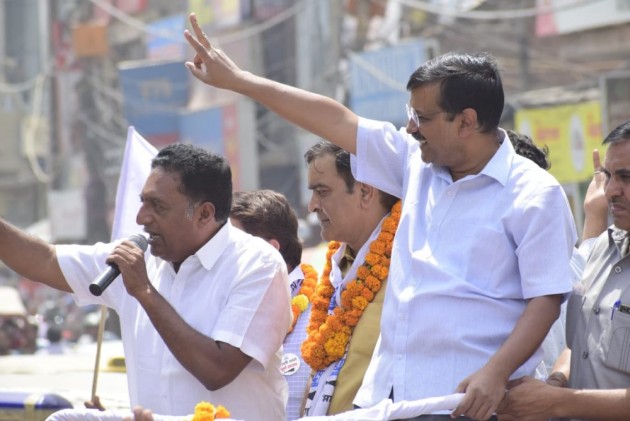 Delhi Chief Minister Arvind Kejriwal, and actor-politician Prakash Raj on Wednesday held a campaign in West Delhi, and asked people to vote for the Aam Aadmi Party (AAP) in the upcoming polls.

Addressing a roadshow in Nasirpur area of West Delhi, AAP chief Kejriwal urged people to vote for the party by pressing the 'jhadu' button.

The chief minister was accompanied by Raj and AAP's West Delhi candidate, Balbir Singh Jakhar during the roadshow, who waved and greeted as the caravan passed through the sea of supporters.

Raj asked people to vote for the AAP as it is the "only party that talks about real issues and has proved its mettle in the education and health sectors".

Jakhar is locked in a three-way fight with Congress candidate Mahabal Mishra, and BJP's Parvesh Verma.

Kejriwal's roadshows are part of the party’s third phase of campaigning.

The third phase of the campaign started from Tuesday and would continue till the last day of campaigning.

The AAP has already carried out campaigning in two phases. The first phase was from March 10 to April 7, while second phase was from April 10-April 25.

In the first phase, campaigning through jansabhas (public meetings) was carried out while door-to-door campaigns marked the second phase.

Delhi goes to polls on May 12 and the counting of votes will take place on May 23.