Around 5,000 farmers from the district are likely to stage a protect outside the Ahmednagar collector's office on Monday to support Hazare's agitation. 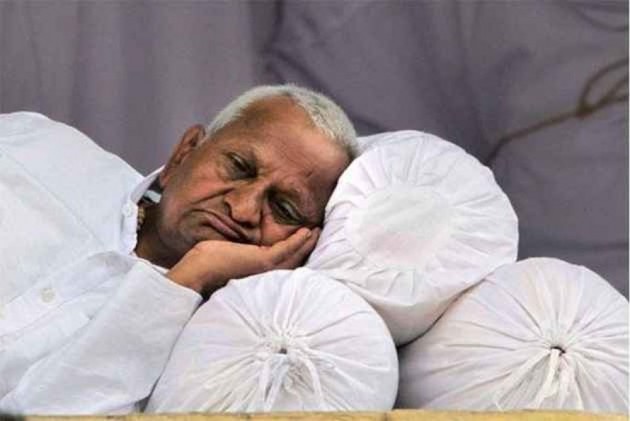 As social activist Anna Hazare's indefinite hunger strike over appointment of Lokpal and Lokauktyas entered the fifth day on Sunday, villagers blocked a state highway in support of his agitation in Ahmednagar district of Maharashtra, leading to traffic jams in the area.

Hazare has been on a hunger strike since Wednesday in his native Ralegan Siddhi village in Ahmednagar demanding appointment of anti-corruption watchdogs at the Centre and in Maharashtra and resolution of farmers' issue.

In support of the 81-year-old Army man-turned- activist's demands, farmers and youth blocked the Ahmednagar-Pune state highway at Supa village in Parner tehsil, located about 38 km from here, in the morning,
resulting in huge traffic jams.

They supported Hazare's demands for immediate appointment of Lokpal at the Centre and Lokayuktas in states where such statutory anti-corruption watchdogs do not exist, implementation of the Swaminathan Commission recommendations on ways to address agrarian distress, besides some electoral reforms, the protest's convener, Shahir Gaikwad, told PTI.

The police, however, tried to pacify the protesters and asked them to clear the road blockade as there were around six-km-long traffic jams on both sides of the road, Supa police station's inspector Rajendra Bhosale said.

The police also detained around 110 protesters in the afternoon to clear the blockade and later let them off, he said.

Dr Dhananjay Pote, who conducted a health check-up of Hazare in the morning, said the anti-corruption crusader has lost around 3.8 kg weight in the last five days and that his blood pressure, blood sugar and creatinine level in urine have gone up.

Around 5,000 farmers from the district are likely to stage a protect outside the Ahmednagar collector's office on Monday to support Hazare's agitation.

The decision for the protest at the collector's office was taken at a gram sabha (village meeting) in Ralegan Siddhi on Saturday night.

Leaders of various political parties from Parner tehsil were present at the meeting and expressed their support to Hazare's protest.

However, Hazare appealed people to protest in a non-violent manner and also asked them to use decent and respectful language while expressing their feelings.

Hazare had earlier declined to meet state government envoy and minister Girish Mahajan for talks over his demands.

The anti-corruption crusader had earlier told PTI that he welcomed the Maharashtra Cabinet's decision to bring the office of state chief minister under the ambit of Lokayukta.

"However, the strike will continue till the government fulfils promises they made before coming to power about passage of Lokayukta Act, appointment of Lokpal (at the Centre) and to tackle farmers' issues," he had said.

The Lokayukta is a statutory body that is empowered to probe complaints of abuse of position and corruption against public servants.