Himanta Biswa Sarma dreamt of heading the state of Assam, probably from the time he stepped into politics, on Monday his dream will come true. 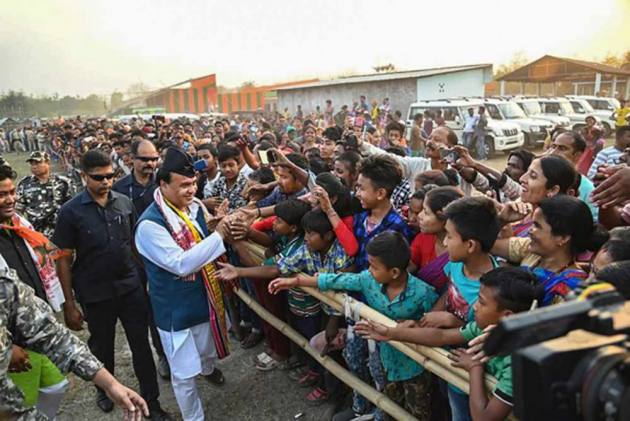 It was a dream come true, a dream he has dreamt from the time he stepped into politics.  On Sunday, Himanta Biswa Sarma was selected as the leader of the BJP legislature party, paving way for his coronation as the chief minister of Assam tomorrow.

Sarma had started showing mettle of his leadership way back in the late 1980s when he became general secretary of the Cotton College Union Society for two successive terms in 1988-89 and 1989-90 and once again in 1991-92. Those were the heydays of the All Assam Students Union of which he was a member.

Soon enough, the crafty Hiteswar Saikia, the then Congress chief minister of Assam, spotted the talent and Sarma was by his side, able to easily make the switch from regionalism that the AASU embodied, to the grand old party, picking up nuances of politics from him. He announced his arrival in 2001 with a giant-killing act when he defeated the then home minister Bhrigu Phukan of the AGP, his other mentor in Jalukbari, as the Congress returned to power. He has not lost the seat since.

His political career started making steady progress under chief minister Tarun Gogoi as he bided time to attain greater heights. After having served the Congress government well while also earning plaudits from the party high command—Sarma was virtually the number two during the third term of Tarun Gogoi’s government—Sarma was now expecting to lead the party in the 2016 elections as Gogoi was also advancing in age. However, realising that Gogoi was in no hurry to let go of the reins and enjoyed the high command’s blessings, he led a dissidence against the former for a year. What had added to his discomfiture was the fact that Gogoi’s son, current Lok Sabha member Gaurav Gogoi, also joined the Congress around the time. Sarma apprehended that his road to the top was going to be blocked and joined the BJP in 2015. Tarun Gogoi would say later that Sarma’s fears were misplaced since Gaurav was still wet behind the ears, had to learn the ropes and harboured no such ambition.

Sarma’s immediate goal was to see the back of the Congress government and went all out. By then, several younger MLAs from the Congress, who swore allegiance to Sarma, also followed him to the BJP fold making his hands stronger for the fight ahead. The rest as they say is history.

The BJP-led NDA, including Asom Gana Parishad and Bodoland People’s Front, trounced the Congress by winning 86 of the 126 seats, leaving the grand old party a distant second with just 26 seats.

Now, there was no stopping him. Sarma thought up the idea of the North East Democratic Alliance, a conglomerate of regional forces in the region, and became its convenor.

Arunachal Pradesh, which had a Congress government, turned saffron overnight leaving only then chief minister Nabam Tuki out; in Manipur, the single-largest party in the assembly elections, Congress, watched as the BJP assumed power; Tripura went from Left to Right. Himanta’s touch was evident all over; he was now a colossus for the BJP in the Northeast.

Sarma was credited for the BJP’s improved showing in the 2019 Lok Sabha elections which saw the party go up from seven to nine seats of Assam’s 14 and further entrenched itself in the state.

In the government, he held key portfolios like finance, PWD, health and education. Sarma’s stock grew even more since last year when the Covid pandemic struck. It is generally agreed that he handled the situation deftly, probably saving Assam more misfortune.

Immersed in work he, however, had not lost sight of his dream. He had earlier declared he would not contest the elections this time, but relented at the request of the party’s central leadership; tongues started wagging that he had secured a promise of the top seat if BJP were to win.

In the just-concluded elections that finally catapulted him to the coveted chair, he played a key role in changing allies – from BPF to UPPL—and nominating candidates some of whom were new. In the process though, he also made sure that he would have more MLAs on his side if it ever mattered. It did as the selection of the chief minister came down to the legislature party after the central leadership in its wisdom decided to leave it to the forum. With the numbers stacked in his favour, the matter was decided. It took just about 15 minutes for him to be named the legislature party leader and thus also the chief minister.

Along the way, Sarma might have got embroiled in a few controversies, but no detractor of his would say he achieved what he did without having to make an effort. He fought alone all the way with a single-minded determination only to be rewarded at the end.