NCP supremo Sharad Pawar's meeting with Maharashtra governor has led to the speculation that all may not be well with the Maha Vikas Agadhi government. 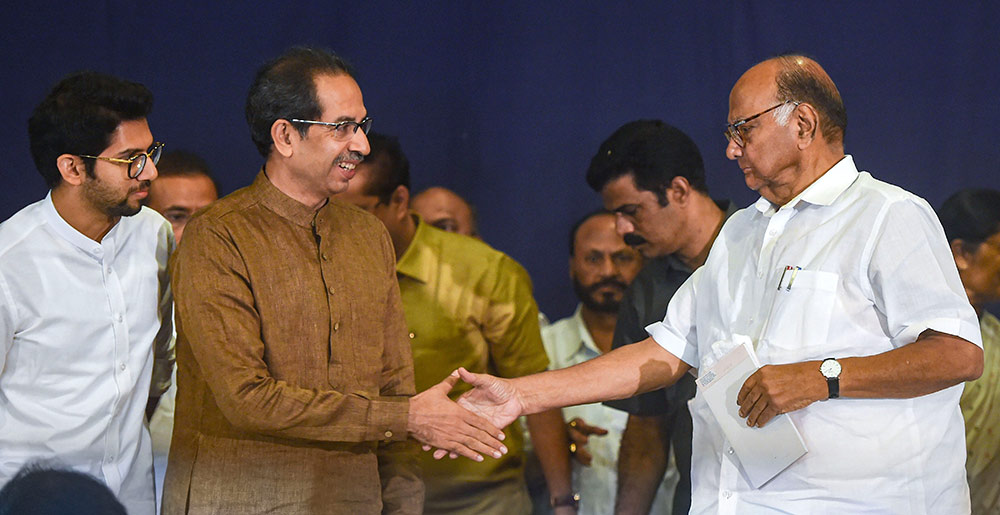 Maharashtra Chief Minister Uddhav Thackeray is currently faced with the twin challenge -- of managing the coronavirus pandemic as well as keeping the Shiv Sena-NCP-Congress government afloat. With almost 62,000 cases, including close to 2,000 deaths, Maharashtra accounts for over one-third of the total COVID-19 infections in India.

Amid all this came NCP supremo Sharad Pawar's meeting with Maharashtra Governor Bhagat Singh Koshyari, leading to the speculation that all may not be well with the Maha Vikas Aghadi (MVA) government.

Speaking to Outlook, NCP leader and cabinet minister Nawab Malik said any question concerning the "instability in the MVA government" was "gossip" by the Bharatiya Janata Party and its leaders.

When asked about the reason behind the towering numbers in the state, Malik said: "No doubt the numbers are high but they are high because we are testing aggressively."

Shaina NC, the BJP spokesperson, however, said the situation in Maharashtra, particularly in Mumbai, was a reflection of "lack of coordination" among the parties running the government, leading to "administrative collapse."

Rubbishing the charges that the BJP has been trying to dislodge the government in the state, Shaina said, "Let this be put to rest. Nobody is trying to topple any government. The Prime Minister has himself appreciated several states such as Rajasthan and Odisha in his meeting with chief ministers."

But we expect a better and aggressive response to the crisis, she said, adding, "time and patience were running out."

Earlier this week, during an interaction with journalists in a press conference, Congress leader Rahul Gandhi's statement that the grand old party was not a "key decision-maker" in the Maharashtra government had also led to critics asking if the latter was trying to wash its hands off the crisis.

Malik defended Rahul's word, saying it's a three-party government and not a Congress government in Maharashtra. "The Maha Vikas Agadhi government will last the entire 5-year tenure," he said.

Sudhir Suryavanshi, author of the book, "Checkmate -- How BJP Won and Lost Maharashtra", says there are differences among the three parties running Maharashtra, but to say the government would fall is a bit of exaggeration. "The NCP and Congress have been in power before and they know how to run the government even if there are differences," he said.