A party source said most of the leaders, however, are hoping that the Gandhi scion will continue to lead the party as the Nehru-Gandhi family acts as a "glue" that binds the party together. 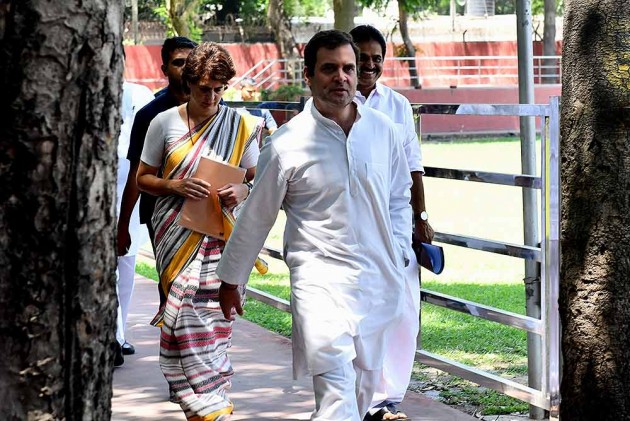 There is still no word on the future leadership of Congress, weeks after party chief Rahul Gandhi made it clear that he wanted to quit as the president.

There is a speculation, though, on the need to put in place an interim arrangement for the decision making, especially in the run-up to assembly elections in Haryana, Jharkhand and Maharashtra later this year, if Rahul Gandhi does not relent.

Sources claimed the stalemate over the party leadership continues ever since Rahul offered his resignation during the Congress Working Committee meeting on May 25.

The CWC had unanimously rejected his offer to quit but Rahul is on his stand, they added.

A party source said most of the leaders, however, are hoping that the Gandhi scion will continue to lead the party as the Nehru-Gandhi family acts as a "glue" that binds the party together, PTI reported.

Meanwhile, rumblings within the state units of the party are growing louder over the massive defeat of the Congress in the Lok Sabha elections in which it managed to win only 52 seats from across the country.

Some Congress leaders from the western Uttar Pradesh were involved in a war of words during and after a Lok Sabha polls review meeting on Tuesday, sources said.

During the meeting chaired by party general secretary Jyotiraditya Scindia, some leaders raised questions over the ticket distribution and blamed senior Congress leaders for the poll debacle in the state, they said.

A war of words erupted among some Congress leaders and arguments continued even after the meeting held at the party's war room at 15, Gurudwara Raqabganj Road here ended.

Differences in the Rajasthan Congress once again came to the fore Tuesday with the party's Lok Sabha candidate for the Jaipur (Urban) Lok Sabha seat claiming that an "internal conspiracy" led to her defeat in the recent elections.

She claimed that Archana Sharma, who was the Congress candidate from Malviya Nagar in the 2018 assembly elections, and her husband "conspired" for her defeat.

Fissures in the Punjab Congress too deepened last week with Chief Minister Amarinder Singh changing Navjot Singh Sidhu's portfolio within hours of the cricketer-turned-politician snubbing him by skipping a Cabinet meeting.

Sidhu Monday met Gandhi in New Delhi and apprised him of the "situation" in the state.

The tension between Singh and Sidhu came out in the open last month when the chief minister had blamed the "inept handling" of the local government department by the cricketer-turned-politician for the "poor performance" of the Congress in the state's urban areas during the Lok Sabha polls.

The Congress is also facing a crisis in Telangana where assembly Speaker P Srinivas Reddy last Thursday recognised 12 MLAs of Congress as members of TRS, hours after they approached him seeking a merger of their group with the ruling party.