As Rahul Enjoys ‘Refreshing’ Politics Of The South, Is Congress Bracing For A Jolt From The North? 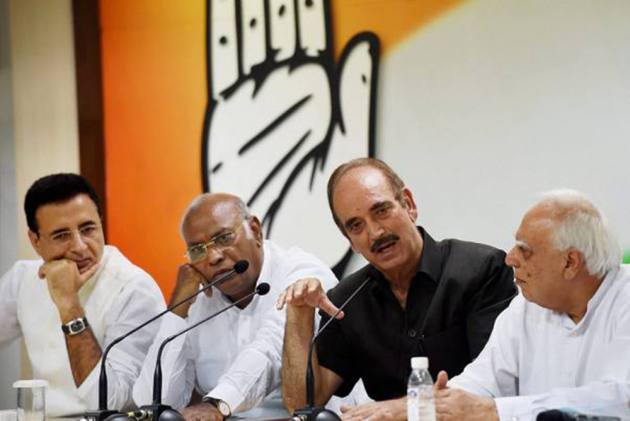 As Congress leader Rahul Gandhi tours the south, basking in the “refreshing” politics of the region, his Grand Old Party is on the edge over a possible jolt coming in from the country’s northern-most state, Jammu & Kashmir, over the weekend. At least six Congress leaders – Bhupinder Hooda, Anand Sharma, Kapil Sibal and Manish Tewari, among them – will be joining former Leader of Opposition (Rajya Sabha), Ghulam Nabi Azad, over the weekend in Jammu during his maiden return to his home state since retiring from Parliament.

The coming together of the leaders, all part of a group of 23 Congress veterans who had sought wide-ranging intra-party reforms eight months back, has triggered another round of unease within the party, a day after the Election Commission announced the schedule for crucial Assembly polls in Tamil Nadu, Kerala, Assam, West Bengal and Pondicherry. Confidantes of the Nehru-Gandhi family have been left wondering if the simmering discontent among the reform-seekers may, once again, erupt into another scathing salvo against interim party chief Sonia Gandhi and her son’s inability to revive the Congress party as a credible electoral alternative to Narendra Modi’s BJP.

Rahul’s recent comment in Kerala about the “refreshing” politics of southern India has been lapped up by the BJP which has criticized the former Congress president of trying to create a “north-south divide”. Congress leaders Kapil Sibal and Anand Sharma, both vocal critics of their party’s current state of affairs, have expressed their reservations against Rahul’s statement. Congress sources say there is considerable resentment within the party – not limited to letter writers like Azad, Sibal or Sharma – over the disproportionately high reliance that the Wayanad MP has begun placing on party colleagues from the southern states like Mallikarjun Kharge and KC Venugopal. His lopsided public outreach – extensive tours in poll-bound Tamil Nadu and Kerala against fleeting visits to Assam and Bengal – too has come in for scrutiny by a section of party leaders who have been left wondering whether Rahul has given up on the idea of reviving the Congress elsewhere in the country.

While the leaders gathering in Jammu to join Azad’s ‘homecoming’ told Outlook that they had “no intention” to embarrass the Congress and its top leadership, they conceded that “nothing had changed for the better in the party” since the letter-controversy and Sonia’s subsequent assurance to them of urgent course correction. “The election for Congress president was put off till June using the bogey of the upcoming Assembly polls… there’s no clear strategy or election plan tailor-made for each of the poll-bound states; instead we are fending off attacks created over a callously made remark (by Rahul) on the difference in politics between north and south India,” one of the leaders who arrived in Jammu to join Azad told Outlook on condition of anonymity.

The leaders’ solidarity for Azad, too, is being viewed within a section of the party as “an act of defiance”, say Congress sources. Narendra Modi’s flambouyant praise and tearful adieu that marked the high point of Azad’s farewell from Rajya Sabha last month as opposed to the perfunctory tributes that the Jammu leader received from his party colleagues amid speculations that any possibility of his re-nomination to Parliament’s Upper House had been quashed by Sonia and Rahul has only deepened the fissures between the coterie surrounding the Nehru-Gandhi family and the letter writers.

Azad, on his part, has made no public statement indicating his views on speculations that the Congress leadership did not want him returning to Parliament or on the rumoured heartburn among the reform-seekers over the appointment of senior leader Mallikarjun Kharge as the new Leader of Opposition in the Rajya instead of elevating Anand Sharma to the post. Azad has maintained that he will continue to be a Congressman and will join the BJP or any other party only when Kashmir receives “black snowfall” but this hasn’t stopped his detractors from repeatedly alluding to a possible collusion between the letter-writers and the BJP.

Leaders close to Azad acknowledge that the party treated him shabbily but maintain that the show of solidarity in Jammu “must not be construed as a show of strength against the leadership by us”. A leader tells Outlook, “unfortunately, anything we have done since that letter or do now is painted as some sort of rebellion.” He said that the decision to join Azad in Jammu was a “show of respect towards a senior colleague who has given his life to the party but is now being humiliated by a few only because he wants the party to continue thriving and remain true to our ideology”

Another ‘dissident’ tells Outlook that the letter writers are aware of attempts by a section of Congress members to “paint all of us as traitors” and to “provoke us to make some statement that can justify this baseless rumour that we are against the Nehru-Gandhi family.” He hinted that Azad was unwilling to attend a reception organised by the state Congress unit at its Jammu office, on Friday, as he suspected “unsavoury remarks may be made against him”. Azad was convinced to attend the event “after PCC leaders pleaded… that his absence would reflect very poorly on the Congress.” He said other letter writers who had arrived in Jammu “deliberately stayed away from the function because we did not wish to give anyone more fodder for baseless gossip… we will join him for public functions which the people are organising”.

Sources say the meeting of some reform-seekers in Jammu won’t be the only such gathering. “We plan to meet on neutral ground wherever and whenever possible… there may be other colleagues who didn’t sign the letter but agreed with our demands who may also join… the idea is to travel across the country and get a sense of what party workers want from the Congress,” a leader said. He, however, qualified the comment saying, “there is absolutely no plan to breakaway or to embarrass the leadership… the only thing we want is for the party to realise that urgent corrective measures need to be taken and the idea of India that leaders like Pandit Nehru worked for needs to be preserved against the assault from the BJP”.

Azad and Co. may not embarrass the Nehru-Gandhi family in ways that the BJP or other Congress detractors hope during their Jammu sojourn. The leaders may cautiously steer clear of any aggressive push for change in leadership. What is evident, though, is that the fragile truce that Sonia had brokered with her senior colleagues in December when she met some of these letter writers may snap anytime soon if she and her son continue to act blind to the growing fault lines. A lot is riding for the Congress on the upcoming assembly polls - a below par performance may embolden the in-house critics to raise their pitch further; just as a revival - however unlikely it may seem at this point - may silence them, at least for a while.