It is widely believed that Sushil Modi’s ‘expose’ of corruption charges against Lalu Prasad’s sons led Nitish Kumar to walk out of the Mahagathbandhan and restore his ties with the BJP in 2017. 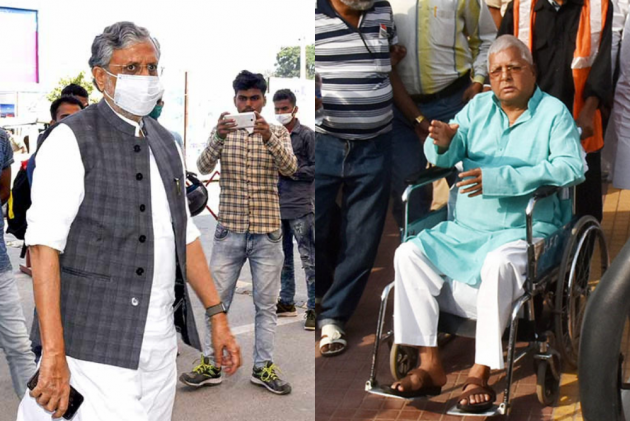 Contrary to widespread expectations, BJP’s Rajya Sabha member, Sushil Kumar Modi did not make it to Prime Minister Narendra Modi’s cabinet. He appears to have moved on and taken it in his stride, but guess, who is gloating over his exclusion? It is Lalu Prasad Yadav’s Rashtriya Janata Dal.

The reasons are not far to seek. The former deputy chief minister has been the political ‘nemesis no. 1’ of the RJD president and his family all through their political career and he continues to fire salvo even as the second generation of Lalu’s clan has taken over the reins of his party.

From being one of the petitioners to Patna High Court seeking a CBI probe into the Rs 950-crore fodder scam in 1996 to holding as many as 44 press conferences on the trot to level a slew of corruption charges against Lalu’s sons, Tejashwi Prasad Yadav and Tej Pratap Yadav while they were ministers in the Nitish Kumar government in 2017, Sushil has been the ubiquitous bête noire of the Yadav family all through these years.

Little surprise then, the RJD could not conceal its glee when Sushil’s name did not figure on the list of the new council of ministers at the Centre. Senior party leader Bhai Virendra says that Sushil holds Lalu ji responsible for just about everything. “Even if a mosquito bites him, he takes Lalu ji’s name,” he says in a sarcastic remark. “Who knows he will say that Lalu ji got his name struck off from the ministers’ list since he is in Delhi!”

The RJD spokesman says that Prime Minister Narendra Modi did not give a ministerial berth to Sushil because he is of a destructive mindset. “Sushil did not do anything for Bihar’s development over the years and PM Modi knows that the BJP’s vote share in the state will reduce if he is made a minister at the Centre.”

In the run-up to the Modi ministry’s expansion which finally took place on July 7, Sushil’s name was being discussed both in the political and media circles as being the front-runner for a key cabinet berth. Given his vast experience as the finance minister in Bihar during which he also headed the Centre’s GST council, the 69-year-old leader was even tipped by many as being the next finance minister. But as fate would have it, he ended up getting no ministerial berth at all.

In fact, reports about Sushil's probable induction in the Modi ministry were doing the rounds ever since he was not included in the Nitish Kumar ministry after the November 2020 Assembly elections in Bihar. The BJP top brass then had handpicked two political lightweights – Tarkishor Prasad and Renu Devi – as the deputy chief ministers, a post otherwise held by Sushil all through Nitish’s successive tenures. At that time, it was said that Sushil would be sent to the Centre to pursue national politics.

Subsequently, he was sent to the Rajya Sabha by the BJP when a seat to the Upper House fell vacant after the demise of the LJP president Ram Vilas Paswan. It lent further credence to the belief that his inclusion in the Modi ministry was a matter of time only. But that was not to be.

For the uninitiated, Lalu and Sushil share an interesting history. When Lalu became the president of the Patna University Students’ Union (PUSU) way back in the early 1970s, Sushil was the general secretary. Later, both of them joined the JP movement as student leaders but swore by different ideologies. Lalu believed in socialist ideology and became the Janata Party MP in 1977 while Sushil, an RSS member, joined BJP through ABVP.

He launched his blistering attacks on Lalu when the latter became the Chief minister of Bihar in the 1990s. Even during Lalu’s imprisonment, Sushil kept accusing him of flagrantly flouting the jail manual.

Lalu, however, did not seem to ever take him seriously, and would often jokingly dismiss him off as being “my secretary” during their Patna University days”. But Sushil proved to be more than that and was later instrumental for Lalu’s downfall more than once. The Patna High Court’s order for a CBI probe into the fodder scam led to Lalu’s arrest, conviction and subsequent disqualification from contesting elections.

It is also widely believed that Sushil’s ‘expose’ of corruption charges against Lalu’s sons led Nitish to walk out of the Mahagathbandhan and restore his ties with BJP in 2017. Sushil is believed to have played a key role from behind the scenes in facilitating that. In fact, many political commentators believe that it is his good rapport with Nitish that has cost him dear in the BJP now.

Sushil, however, appears to be unperturbed over his exclusion from the Modi ministry and continues to do what he does best as a one-man army, happy firing salvos at his favourite target, Lalu & Co. in Bihar.