As US Warns Iran Of 'Misadventure', Tehran Sends Its Foreign Minister To Delhi For Talks

The meeting comes amid the heightened diplomatic tension between Iran and the United States after Washington announced that no fresh sanction waivers will be issued for Iranian oil imports to eight countries including India. 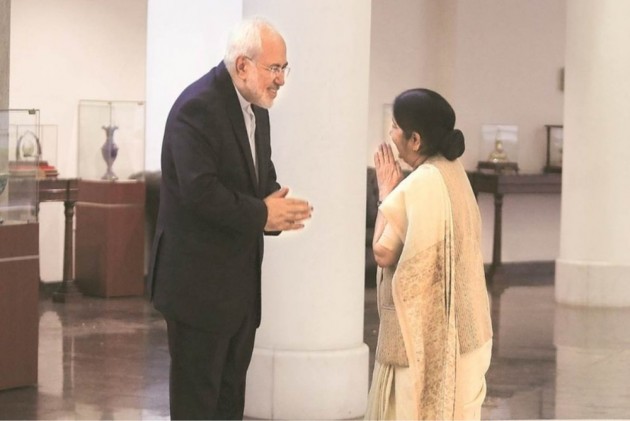 The meeting comes amid the heightened diplomatic tension between Iran and the United States after Washington announced that no fresh sanction waivers will be issued for Iranian oil imports to eight countries including India.

US President Donald Trump Monday warned Iran against any misadventure.

"We'll see what happens with Iran. If they do anything, it would be a very bad mistake," Trump told reporters at his Oval Office of the White House.

He was responding to questions on US military build-up against Iran and if he was at war with Tehran.

"I'm hearing little stories about Iran. If they do anything, they will suffer greatly. We'll see what happens with Iran," Trump said, as his Secretary of State Mike Pompeo stopped in Brussels to brief NATO allies on the latest developments with regard to Iran.

Pompeo cancelled his scheduled trip to Moscow on Monday to make an unannounced visit to Brussels.

"The secretary shared information and intelligence with allies and discussed the multiple plot vectors emerging from Iran. We know that Europe shares our concerns about stability in the Gulf and in the Middle East," Special US Representative for Iran Brian Hook told travelling American press in Brussels.

Pompeo, he said, had always been diligent about sharing information with allies as threats to peace and security warrant.

"Iran is an escalating threat, and this seemed like a timely visit on his way to Sochi," Hook said, adding that Iran was the main topic of discussion for Pompeo with the NATO secretary general as well.

During the meeting in Brussels, Pompeo shared details about Iran. "We believe that Iran should try talks instead of threats. They have chosen poorly by focussing on threats," Hook said.

"We did discuss the reported attacks on the two Saudi tankers, the Norwegian tanker and the Emirati tanker," he added.

The goal of the Trump Administration, he said, continued to be for Iran to behave like a normal nation and not like a revolutionary cause.

"They have been exporting violent revolution around the Middle East for 40 years. We have put in place an entirely new foreign policy with respect to the Iranian regime. Iran's era of deniable attacks is over," Hook asserted.

"Tehran will be held accountable for the attacks of its proxies. They cannot organise, train and equip their proxies and then expect anyone to believe that they had no role. And so, we will not make a distinction between the Iranian government and its proxies," he said.

"If they conduct attacks, we think that given the 40-year history of Iran only responding to pressure and isolation, that this is the best course given the nature of this regime," Hook added.

"If talking nicely worked, we would have settled this decades ago. But this is a regime that only understands economic pressure and diplomatic isolation. And we are committed to this strategy because it has the best chances of de-escalating the threats that we see stretching from Lebanon to Yemen," he said.

"The American people deserve to know that US laws are enforced regardless of any individual's past position," he said.

The Department of Justice should therefore make a determination on whether or not former Secretary of State John F Kerry's recent actions related to the Joint Comprehensive Plan of Action with Iran potentially violated the Logan Act or the Foreign Agents Registration Act, Rubio said.