The self-styled Godman has been facing varying jail terms including life sentence in sexual assault cases. 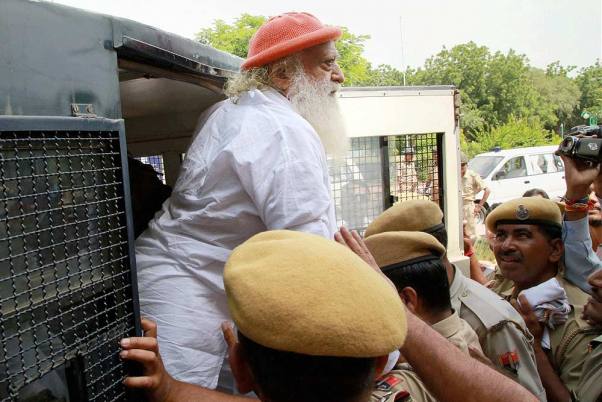 The Supreme Court Friday sought Rajasthan government's response on a plea of self-styled Godman Asaram Bapu to allow him to undergo “holisitc” treatment at an ayurvedic centre near Haridwar in Uttarakhand.

The apex court was not inclined to grant interim bail by suspending self-styled Godman's sentence for two months to enable him to get “holistic” treatment of his multiple ailments at a medical centre of his choice.

“Issue notice (to Rajasthan government),” a vacation bench of justices B R Gavai and Krishna Murari said and listed the plea for hearing on Tuesday.

The top court, in the proceedings conducted through video-conferencing, was hearing the appeal of Asaram against the Rajasthan High Court order which dismissed his plea for suspension of sentences to undergo treatment at a medical centre of his choice.

The plea was filed through lawyer Saurabh Ajay Gupta.

“I am here for interim bail. I am 83-year-old man serving life term and there has been history of medical ailments,” Luthra said. “Give him two months' time to recuperate. This is the limited relief which I am seeking. Today he needs holistic treatment”.

“We are not medical experts,” the bench said, adding that it would not consider suspending the sentence and would rather issue notice to know the view of the state on permitting him to undergo treatment at a centre in Uttarakhand. "We will ask the government to admit him there".

Luthra said: “All I am saying is that he needs a holistic treatment which will not happen. They (Mahatma Gandhi Hospital at Jodhpur) had given him blood thinners when he was bleeding.”

He said Asaram wanted to be treated at Prakash Deep Institute of Ayurved which is located between Hardwar and Rishikesh in Uttarakhand.

A Jodhpur court, on April 25, 2018, had sentenced Asaram to life in prison after finding him guilty of raping a teenage girl in his ashram in 2013.

His accomplices Sharad and Shilpi were sentenced to 20 years in jail by the court in the same case for their roles.

The teenager had said in her complaint that Asaram had called her to his ashram in Manai area near Jodhpur and raped her on the night of August 15, 2013.

The 16-year-old girl from Shahjahanpur in the northern Indian state of Uttar Pradesh was studying at Asaram's ashram in Chhindwara in the central Indian state of Madhya Pradesh.

He was also convicted in a 2002 rape case and sentenced to 20 years in prison.

Asaram is also facing a rape case in Surat in Gujarat.

Asaram was arrested in Indore and brought to Jodhpur on September 1, 2013. He was under judicial custody since September 2, 2013.