The governor had turned down three earlier proposals, saying if the government wanted the assembly summoned at a short notice it should state that it planned to hold a vote of confidence. 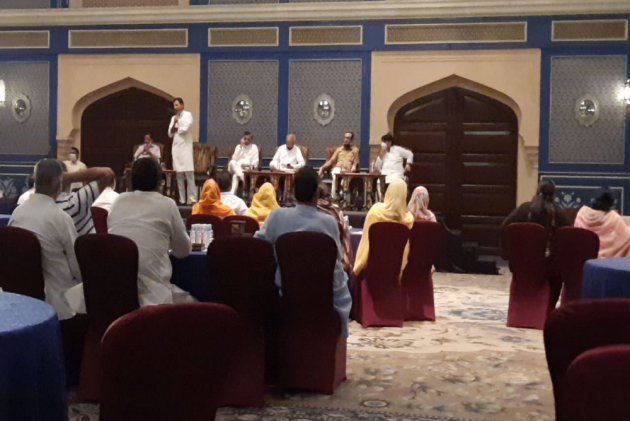 Congress MLAs huddled in a hotel here for the last fortnight will continue to camp together till the Rajasthan Assembly meets on August 14, a party leader said Thursday.

This was discussed at the Congress Legislature Party (CLP) meeting held at the Fairmont hotel on the outskirts of the city, where MLAs loyal to Chief Minister Ashok Gehlot are staying since the July 13.

"All legislators will remain united and stay together till August 14," Congress chief whip Mahesh Joshi said after the CLP meeting chaired by Gehlot.

After rebuffing a Cabinet proposal three times, Governor Kalraj Mishra on Wednesday agreed to convene a session of the Vidhan Sabha on August 14.

Gehlot and his now sacked deputy Sachin Pilot are locked in a tussle for power in the state.

Altogether, there are 107 Congress MLAs in the 200-member assembly, but Sachin Pilot and 18 other dissident MLAs have openly defied a party whip.

At one point, Pilot claimed that 30 Congress MLAs were with him. But the Gehlot camp claims that with the support of independents and allies it has the majority support in the House.

The Congress numbers include six Bahujan Samaj Party MLAs who merged as a group with the ruling party after the 2018 assembly polls. The merger is now being challenged in the high court by the BSP and a BJP MLA.

While saying that the loyalist MLAs will stay together till the session begins, Mahesh Joshi did not clarify whether they will continue at the same hotel.

"It will be decided where to stay," he told reporters. But he ruled out any location outside the state.

Joshi said the minister will take care of their departments during this period, adding that they have been going to the Secretariat.

Before the CLP meeting a core group discussed the Gehlot group’s strategy.

The 19 MLAs in the rival Sachin Pilot camp are also said to be camping together at hotels in Guragon near Delhi.

The Gehlot camp had indicated that it may seek a vote of confidence when the House meets, but refused to specifically state that this is a part of the session’s agenda.