In the morning, Rajasthan Parliamentary Affair Minister Shanti Dhariwal had moved the motion of confidence in Rajasthan Assembly. 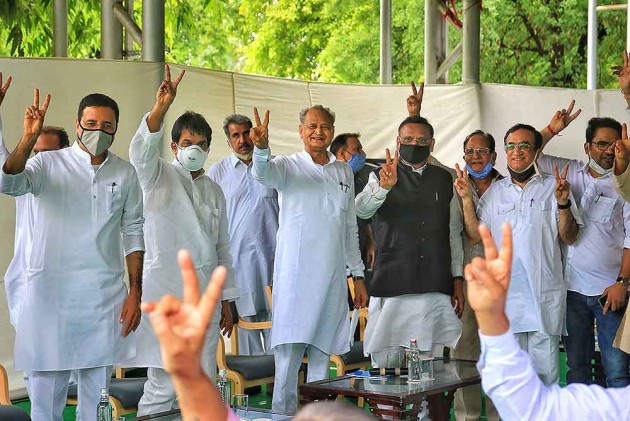 The Ashok Gehlot government won a confidence vote in the Rajasthan Assembly on Friday, ending the threat triggered by a rebellion within the Congress ranks in the state.

The motion of confidence moved by Parliamentary Affairs Minister Shanti Dhariwal was passed by voice vote, an expected win after the return of the 19 dissident Congress MLAs led by Sachin Pilot to the party-fold.

Replying to the debate on the motion, Chief Minister Ashok Gehlot criticised the BJP, accusing it again of trying to bring down his government.

"I will not let the government topple at any cost even if you make all attempts," he said.

Gehlot said the crisis had come to an end in a “beautiful manner” and this had hurt the Bharatiya Janata Party.

“What was done in Arunachal Pradesh, Karnataka, Goa, Madhya Pradesh? Elected governments are being toppled and democracy is under danger," he said, accusing the BJP of targeting Congress governments.

Without taking names, he alleged that a Union minister was involved in the “conspiracy” to topple his government, saying this had become clear after some audio clips surfaced.

The indirect reference was to Gajendra Singh Shekhawat, who has earlier rejected the Congress allegation

The opposition BJP accused the Gehlot camp of blaming it for the infighting within the Congress.

Targeting the chief minister for his comments against his now sacked deputy, Leader of Opposition Gulab Chand Kataria questioned how Pilot became “useless” after the formation of the government when he had strengthened the party while in opposition.

Mocking Gehlot for keeping his loyalists holed up in hotels for a month, he said if the government had a majority it could have proven it earlier.

He also questioned the Congress government over the deployment of the state police at hotels where the MLAs were staying.

The rebellion by Sachin Pilot ended earlier this week after the intervention of the party’s top leadership in Delhi, which assured that his grievances will be heard. On Thursday, Gehlot and Pilot shook hands.

Pilot intervened in the debate, reacting to remarks by Kataria and Deputy Leader of Opposition Rajendra Rathore.

Referring to his seat being changed – earlier he sat next to Gehlot as the deputy chief minister – Pilot said he is now placed at the “border” between his party and the opposition in the House.

"Who is sent to the border? The strongest warrior is sent," he said.

Indirectly, he also referred to his meeting with the party high command.

"But I want to tell that whatever I or my companions had to say, we have told the doctor about our complaints,” he said, adding that the MLAs were now all together in the assembly after receiving the “treatment”.

The House later adjourned to meet again next Friday.