They select sites for nesting close to human habitations as there would be less risk from predators. But, little did the birds know that humans would turn out to be the predator. 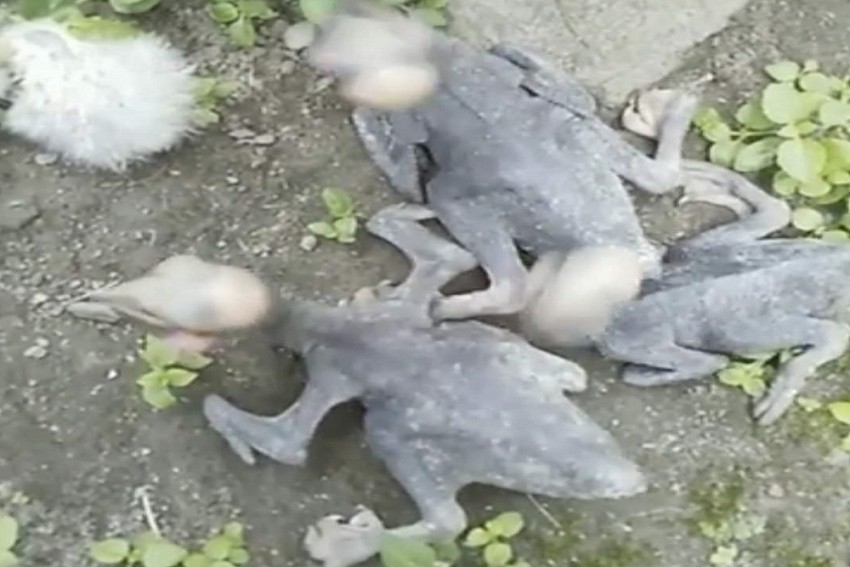 Over 50 bird chicks, which fell to the ground after the bamboo grove in which they were nesting was cut down at Tangla in Udalguri district in Assam on Thursday, are in critical condition, a veterinarian at the Centre for Wildlife Rehabilitation and Conservation (CWRC) said on Friday.

Around 250 chicks had died in the incident.

Dr. Samsul Ali, veterinarian at CWRC, said they had received 88 live chicks while five were found dead on arrival. The chicks are from three species—cattle egret, little egret and little cormorant.

“The condition of 55 hatchlings and nestlings is critical while the fledglings are stable,” Ali told Outlook. “We are doing our best to save them,” he said. The chicks just born are hatchlings while those that are about 15-days old are nestlings. Fledglings, on the other hand, are those that have already started growing wings. He said the fledglings could be set free in the wild in about four to six weeks.

Ali, who himself is from Tangla, said these birds come to nest during this season and usually perch themselves on the bamboo groves.

The Tangla civic body served notice on some persons on June 8 asking that they cut down the bamboo grove since bird droppings were making the place unhealthy and unhygienic which could further spread Covid-19. The people did not oblige and on Thursday some people cut down the grove bringing the nests crashing down and killing the birds.

“We still don’t know who actually cut down the bamboo grove,” the district deputy commissioner Uday Praveen told Outlook. He said the forest department has lodged a complaint with the police in this regard while he has already served a show-cause notice on the officer who had issued the notice for spreading Covid rumours. An inquiry has also been ordered and the report is expected in the next couple of days.

“The bird droppings were giving out a strong and foul stench which was being objected to by people living in the vicinity and they complained to the civic body,” the DC said. “The officer gave in to the pressure and issued the notice, but he didn’t have any intent to follow up on the notice,” the DC said citing the officer, adding that some people then cut down the grove on the premises of one Lokajit Sutar.

Rathin Barman of Wildlife Trust of India said the three bird species generally share the same site for nesting. “Their food habits are similar and they select sites near water bodies or paddy fields for nesting. Besides, these sites are close to human habitations as there would be less risk from predators,” he said. At Tangla, little did the birds know that humans would turn out to be the predator.