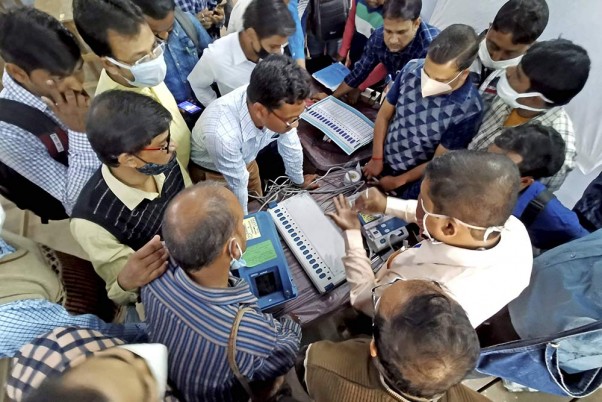 Attempting to snatch an EVM at a polling booth in Assam's Udalguri district, alleging rigging by BJP and its ally UPPL, the police in Assam fired rubber bullets at a mob that injured two people.

After the poll ended, an argument broke out between polling agents and officials over the signing of documents.

Barring two polling agents, all others reached the venue late in the morning as a result of which, their signatures could not be collected. The presiding officer also did not take the signatures at the end of the polling, an official of the district administration said.

"Soon, a crowd of over 500 people gathered at the spot and attempted to snatch the EVM alleging rigging by BJP and UPPL members. A police team led by the district additional SP reached the spot. Failing to pacify the crowd, they fired rubber bullets to disperse the mob. Two persons sustained minor injuries," he said.

BPF candidate Durga Das Boro reached the spot and tried to pacify the crowd. Later, the police escorted the polling team to deposit the EVM at the strongroom.

Voting at the Kalaigaon constituency took place in the second phase on Thursday.